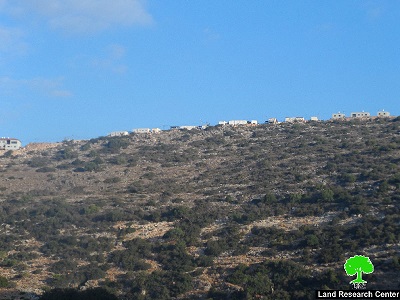 Israeli Defense Minister Moshe Yaalon ordered the “Civil Administration Office,’ run by the Israeli army in the occupied West Bank, to legalize the El Matan illegal settlement outpost, built on Palestinian lands belonging to residents of the central West Bank district of Salfit.The decision grants the outpost a legal status that enables the Israeli government to provide it with all services and infrastructure, including expanding and paving roads leading to it.

Two months ago, the Israeli government illegally confiscated 100 Dunams (24.71 Acres) of Palestinian lands in Qana valley, west of Deir Estia in Salfit, after declaring them as a “natural reserve” in order to annex the lands to the settlement, before declaring it as settlement #24 in Salfit.

The outpost was established in 2000 by a group of fanatic Israeli settlers from the nearby illegal settlements of Karnie Shomron and Ma’ale Shomron.

Since then, Israel has been preventing the Palestinians from entering their farmlands in the area, especially after Tel Aviv declared it as a natural reserve.

Israeli settlements in the occupied territories, including in and around occupied East Jerusalem, are illegal under International Law; this includes all settlements, officially recognized by Tel Aviv, and all illegal settlement outposts.