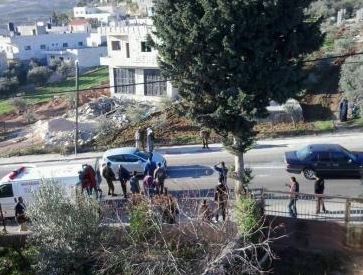 Palestinian medical sources have reported, on Wednesday morning, that a child was injured after being hit by an Israeli settler’s car, in Teqoua’ town, east of the West Bank city of Bethlehem.Eyewitnesses said the child, Amir Majed Suleiman, 10 years of age, was heading to school when the settler struck him, and that the assailant fled the scene heading towards the Teqoua’ illegal Israeli settlement, built on Palestinian lands.

Medics rushed to the scene, and moved the moderately wounded child to Beit Jala government-run hospital.

In related news, Israeli extremists attacked a number of Palestinian villagers in their own lands, east of Bethlehem.

Head of the Janata local council Zayed Mousa said a large number of settlers attacked Palestinian farmers plowing their lands, and started shouting and cursing at them before throwing stones at them.

The lands are isolated due to the illegal Israeli Annexation Wall and Israel’s illegal settlements; the villagers obtained the required permits from the army to enter their lands, but had to leave after being assaulted by the settlers.

Furthermore, Israeli soldiers demolished a shed and bulldozed an agricultural land, belonging to a local resident, in the Srouj area, south of the southern West Bank city of Hebron.

In Nablus, in the northern part of the West Bank, local villages of Qasra village foiled an attack by a number of Israeli extremists who infiltrated into the village.

Later on, Israeli soldiers invaded the village, and fired gas bombs and rubber-coated metal bullets at the residents to force them away; the soldiers allowed the settlers to leave and head back to their illegal settlement.