86 Israeli Attacks on Islamic and Christian Holy Sites in 2014 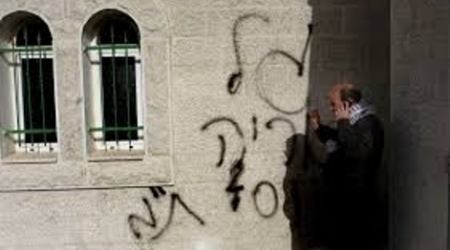 Al Aqsa Association for Waqf and Heritage has reported that Israelis carried out some 86 assaults and violations of Islamic and Christian Palestinian holy sites in the occupied West Bank and Jerusalem in 2014.In a report published Wednesday, the association stated that about 30 cases of assault on mosques, 21 cases of assault on graveyards, six cases of attacks on Christian holy sites, and other sporadic attacks, including preventing the call for prayer in Hebron’s Ibrahimi Mosque hundreds of times — amounting to dozens a month — were documented.

To the previous list, the association added the complete destruction of 73 mosques, the partial vandalism of 197 mosques, and damage of one church during this past summer’s war on Gaza.

Al-Aqsa Association recorded five cases of burning mosques or parts of them, including the burning of Ali bin Abi Talib mosque in the village of Deir Estia, in Salfit, spraying of racist slogans on a shrine in Anata town near Jerusalem, Abu Bakr mosqe in Umm al-Fahm, and Abu Bakr mosque in the town of Aqraba, south of Nablus, and the Great Western mosque al-Mughayir village in Ramallah.

Other incidents were recorded such as the attacks on two mosques and Islamic shrines with racist writings and Talmudic words. The report also documented the demolishing of five mosques in Nablus, Jerusalem and Naqab.

Meanwhile, six cases of assault on Christian holy sites were also recorded by the association.
In April, ‘price tag’ groups vandalized a monastery in Rafat, to the west of Jerusalem, while an extremist Israeli threatened a priest in Nazareth. Another incident happened in the same month, when price tag groups sprayed racist comments near the Roman church in Jerusalem.

The report also recorded 18 attacks against mosques in Hebron and Bethlehem, while other attacks which were documented targeted Muslim’s graveyards, such as smashing gravestones, stealing monuments, spraying racist comments, confiscating yards and selling the land to build commercial malls.

According to the report, in 2014, Israeli forces and settler efforts increased to take control over Waqf land to turn it into Jewish shrines; among these attempts were putting up fake gravestones and raiding the sites.

As for the Ibrahimi Mosque, which is targeted on daily basis, the call for prayer was prevented more than 250 times under the pretext that it annoys Israeli settlers. The violations include preventing worshipers from entering the mosque to pray.

In the Gaza Strip, the Ministry of Waqf and Religious Affairs said the Israeli army destroyed 73 mosques completely, 197 partially, and one church partially. It added that six Zakat offices were completely damaged, a waqf school was bombarded and 11 graveyards were destroyed.