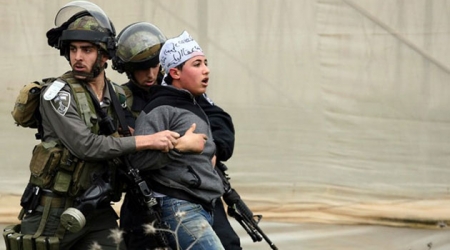 Israeli forces, Thursday detained a 17-year-old from the village of Al Arqa, to the west of Jenin, and caused tens others to suffocate from teargas during confrontations, security sources told WAFA Palestinian News & Info Agency.The minor detained was identified as Ibrahim Yehya. Confrontations erupted when forces stormed the village, firing teargas and stun bombs. Al Arqa village is adjacent to the ‘separation barrier’ or apartheid wall.

Meanwhile, the Palestinian Prisoner’s Society (PPS) reported that Israeli forces arrested two youth from the city of Qalqilia, north of the West Bank.

The organization clarified, in a press statement, that the two detained are 18-year-old Muneer Mohammad and Saher Farraj. They were stopped and detained at the western checkpoint near the city.