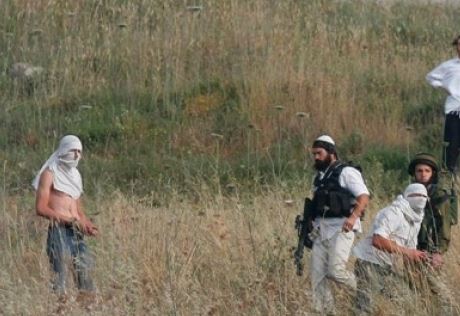 Dozens of fanatic Israeli settlers gathered, on Thursday at night, on the main Jenin-Nablus road, in the northern part of the occupied West Bank, and attacked several Palestinian cars. Settlers approve olive saplings near Bethlehem. Local sources said the settlers hurled stones at the cars, and surrounded them before trying to assault the Palestinians while shouting and cursing at them.

The sources added that Israeli soldiers were in the area, but did not even attempt to stop or remove the settlers.

Groups of settlers also invaded the location of a former illegal Israeli settlement outpost, near Sanour Palestinian village, south of Jenin, and attacked many Palestinians.

On Thursday evening, a number of extremist Israeli settlers invaded a Palestinian orchard, near the al-Khader town south of Bethlehem, and uprooted at least 80 olive saplings belonging to resident Mohammad Ibrahim Ghneim.

Coordinator of the Popular Committee against the Wall and Settlements in al-Khader Ahmad Salah said the attack targeted Thaghret Hammad area, close to Eliezer and Daniel illegal settlements.

He added that the area in question is subject to frequent attacks by the settlers and the army, and that the soldiers recently decided to illegally confiscate 80 Dunams of Palestinian lands to expand the illegal settlements.