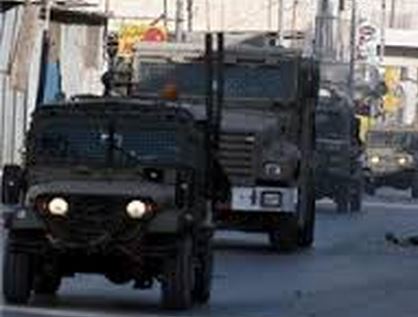 At least eleven Israeli military vehicles invaded, on Friday at dawn, several areas south of the West Bank city of Ramallah, and Betunia town, and kidnapped two Palestinians.Media sources in Ramallah have reported that the army invaded Ein Monjed and al-Masyoun areas, in addition to Betunia nearby town, and clashes with dozens of local youths. The soldiers fired rounds of live ammunition, gas bombs and rubber-coated metal bullets.

The sources added that the army surrounded an old house in the al-Masyoun neighborhood and detonated its front door before kidnapping Mohammad al-‘Ajlouni, and another Palestinian who remained unidentified until the time of this report.

The soldiers then withdrew to the ‘Ofer military base, built on Palestinian lands belonging to Betunia town.

In related news, soldiers of the Nachshon brigade, operating in Israeli detention centers, broke into a room in Section 1 of the Majeddo prison, allegedly after the detainees wrote graffiti on it walls.

The soldiers also attacked several detainees, and imposed fines on them; three of them have been identified as Ahmad Daraghma, Wael al-Hashash, Hosni al-Burini and Hamza al-Qar’wai.