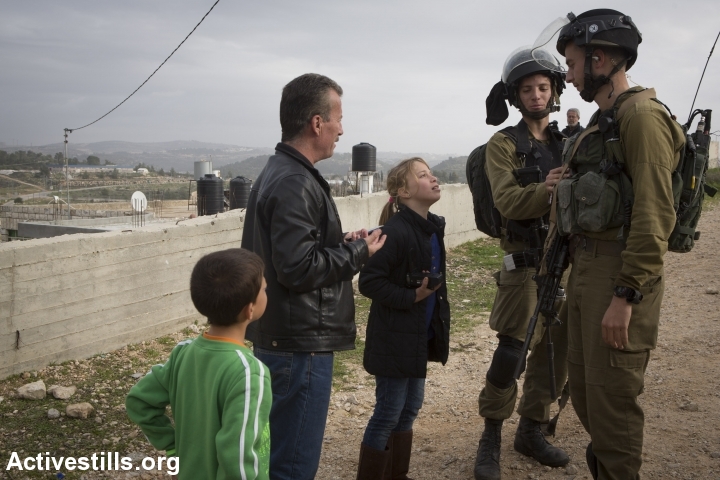 One boy was injured, and scores of civilians were treated for the effects of tear gas inhalation on Friday when Israeli soldiers attacked nonviolent weekly protests organized in West Bank villages. The protests are held every Friday midday in a number of West Bank villages to protest the illegal confiscation of the villages’ land for the construction of the Israeli Annexation Wall.

This week, Israeli troops attacked the weekly protest organized by the villagers of Kufur Qaddoum in the northern West Bank. One of the spokespeople for the non-violent movement in the village, 45-year old Khaldoun Abu Khaled, was abducted by the occupying troops.

Soldiers also invaded the village and fired tear gas into residents’ homes. As a result, many civilians, including children, suffered effects of tear gas inhalation.

In the central West Bank, in the villages of Bil’in and Ni’lin, Israeli soldiers attacked the protesters as soon as they reached the gate in the wall that separates local farmers from their lands. As a result, many protesters suffered the effects of tear gas inhalation and were treated by field medics.

In the nearby village of al Nabi Saleh, Israeli troops fired several rounds of rubber-coated steel bullets at the villagers as soon as they reached the village entrance.

One boy was injured in his leg and was moved to a hospital in the nearby city of Ramallah. Moreover Israeli troops fired tear gas at residential areas causing damage to the houses as some of the tear gas canisters went through the windows inside the villagers’ homes.

In Al-Ma’asara village, Israeli troops stopped villagers and their supporters at the entrance of the village and forced them back, however, no injuries were reported.

The non-violent weekly protests have gone on every week for more than ten years, with the participants committing themselves to non-violent responses to the Israeli military’s violence. The military has used these weekly protests as a ‘testing ground’ for experimental crowd control weapons, including sonic blast weaponry, ‘skunk water’ that is a mixture of cadaver and feces smells that is sprayed on protesters bodies, where it causes adverse reactions and remains for weeks, toxic ink sprayed onto protesters’ bodies for later identification during village house raids, experimental gas bomb combinations and rubber-coated steel bullets that have caused a number of deaths.