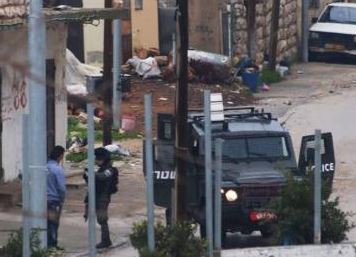 Israeli soldiers invaded various Palestinian communities in Hebron and Jerusalem, late on Sunday at night and on Monday at dawn, and kidnapped six Palestinians after searching and ransacking their homes.Media sources in Jerusalem said several military vehicles invaded Kufr ‘Aqab, and Um ash-Sharayet, north of occupied East Jerusalem, and clashed with local youths who hurled stones and empty bottles at them.

The soldiers also invaded the home of resident Omar Abu Sarah, 50 years of age, and kidnapped him.

In Hebron, in the southern part of the occupied West Bank, soldiers kidnapped on Monday at dawn three Palestinians, also after searching and ransacking their homes.

Soldiers also invaded ath-Thaheriyya nearby town, and drove around in its streets before withdrawing later on.

In addition, the army installed roadblocks on the main entrances of Sa’ir and Halhoul towns, and the northern entrance of Hebron city, before stopping and searching dozens of cars while inspecting the ID cards of the residents and interrogating them.