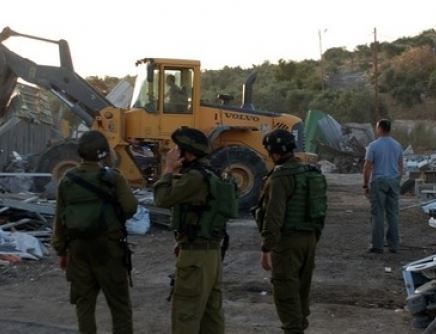 Several armored Israeli military vehicles and bulldozers invaded, earlier on Monday at dawn, the town of Husan, west of the West Bank city of Bethlehem, and demolished a car-wash structure, and two warehouses used for storing sanitary supplies.Taha Hamamra, a local nonviolent activist of the Popular Resistance Committee against the Wall and Settlements in Husan, said several armored army vehicles and bulldozers invaded the al-Mashahed area, west of the town, and demolished a carwash structure belonging to resident Firas Sabri Shousha.

The army alleged the structure was installed without a permit from the “Civil Administration Office,” run by the military in the occupied West Bank.

Hamamra added that the army previously demolished the facility three times, under the same pretenses.

In addition, soldiers demolished a warehouse for sanitary products, owned by Ishaq Hamamra, after forcing him to empty it.