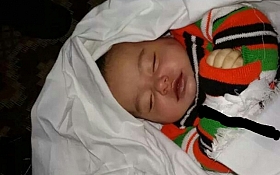 Dr. Ashraf Al-Qedra, spokesperson of the Ministry of Health in Gaza, said the infant has been identified as Rahaf Abu ‘Aasi, four months of age, from the az-Zanna area in Khan Younis.

The infant suffered from bronchial inflammation that choked her to death due to extreme cold in the war-torn Gaza strip that lacks basic supplies and humanitarian needs.

Al-Qedra said dozens of Palestinians have been injured in different parts of the Gaza Strip due to mudslides and accidents resulting from the excessive rain, and extreme cold temperatures.

The infant and her family lived in a home that was partially destroyed during the Israeli war on the Palestinians in Gaza this past summer.

The family sealed its windows with plastic bags and other materials in an attempt to keep the cold out.

Media sources in Gaza said dozens of homes have been completely flooded by the rain, while dozens of rescue workers and hundreds of volunteers rushed to help the devastated families.

Civil Defense teams and volunteers had to use boats to reach the families in heavily flooded areas.

Dozens of mobile homes, used by families who lost their homes during the Israeli aggression on Gaza, have also been flooded in Khuza’a town in Khan Younis.

Shihda Abu Rock, head of the Khuza’a Local Council, said the floods broke through the homemade dams, and flooded the entire neighborhood.

There are two neighborhoods of temporary shelters and mobile homes in Khuza’a providing temporary housing for dozens of families, who lost their homes due to Israeli bombarded of civilian areas, resulting in the destruction of nearly 500 homes in the area alone.

On Saturday evening, January 3, two brothers 3 and 4 years of age, died after a fire broke out in their home in the Shaty’ refugee camo, west of Gaza city.

The family was using candles to light their home due continued power outages resulting from the ongoing Israeli siege, and the latest Israeli war on the coastal region.

Approximately 17.000 Palestinians are still living in 18 UNRWA schools in different parts of the Gaza Strip after the Israeli army bombarded their homes.

The Ministry of Housing in Gaza said the number of homes that have been destroyed, and partially damaged, during the Israeli aggression on the coastal region is close to 124,000.