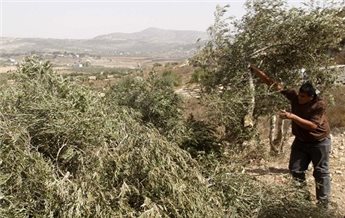 Israeli settlers have cut down over 170 olive trees in a village to the south of Nablus, the third such attack in the occupied West Bank over the past three days.Ghassan Daghlas, who monitors settlement-related activities in the northern West Bank, told Ma’an News Agency that settlers from the illegal settlement of Tappuah completely chopped down more than 170 ancient olive trees.

The attack took place in private Palestinian groves located in Yasuf, near the settlement’s perimeter fence.

The trees were reportedly of the ‘Roman’ variety, a term used in Arabic to describe olive trees with huge trunks that are known to be hundreds of years old.

This recent act of settler vandalism comes only two days after colonial Israeli settlers carried out two different operations, near Hebron, in which they destroyed some 345 olive trees belonging to Palestinian farmers.

Attacks on olive trees are a key way of attempting to force Palestinians out of their homes. Their lands are then confiscated for settlement construction.

Since 1967, approximately 800,000 olive trees have been uprooted in the occupied West Bank, according to a joint report by the Palestinian Authority and the Applied Research Institute Jerusalem.

There were at least 329 incidents of settler violence against Palestinians in the occupied West Bank in 2014, according to the United Nations Office for the Coordination of Humanitarian Affairs.

Though UN resolutions are firmly in place to protect the rights of Palestinians, they are not enforced, further contributing to the historic disenfranchisement and displacement of the Palestinian people.

Palestinians now make up the largest refugee group in the entire world.