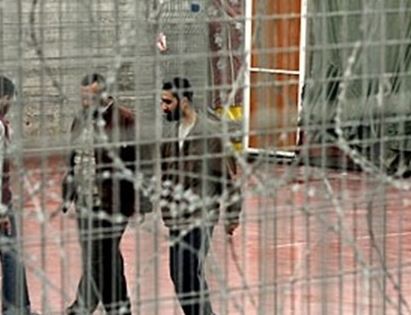 The Palestinian Commission of Detainees and Ex-Detainees Affairs stated Sunday that the Israeli Prison Authority closed, on Sunday January 11, the Ramon Prison due to the extreme cold weather, especially after the rain flooded all sections and rooms.It stated that several the detainees nearly froze to death, and became unable to move their limbs due to the cold in their rooms.

“Their suffering escalated after the Prison Administration refused to allow their families to provide them with winter clothing and sheets,’ the Commission reported, “They have no heating in their rooms, while the freezing temperatures are even depriving the detainees from sleeping.”

The commission said thousands of political prisoners, in various Israeli prisoners, detention and interrogation centers, are exposed to extreme cold as temperatures continue to drop due to the current snowstorm in Palestine.

The Commission stated that more than 6500 Palestinians, including at least 250 children, are currently held by Israel, facing very difficult conditions, constants harassment, and are now subject to the impacts of the current freezing weather.

In related news, the Palestinian Prisoner Society (PPS) filed an appeal with the Israeli High Court Saturday calling on Israeli authorities to provide adequate clothing and covers for Palestinian prisoners held in Israeli prison camps, as many of the prisoners are held in outdoor camps with no heat, in the midst of a severe winter storm.

The appeal also included reports that the placement in outdoor cages was being used by Israeli interrogators as a form of torture.

The Israeli High Court denied the appeal, but Palestinian prisoner groups say that the practices are ongoing, and many Palestinian prisoners are facing death or severe frostbite as a result of the cold, sleet and wind. http://www.imemc.org/article/70229