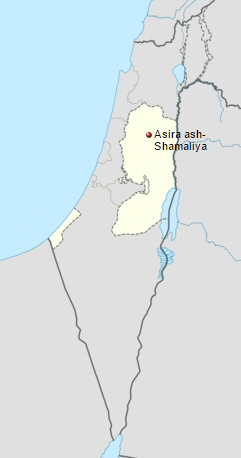 Israeli forces, early Sunday morning, closed all entrances to the town of Asira Ash-Shamaliya, north of Nablus, according to a local official.Head of the town’s municipality, Nasir Jawabreh, told WAFA Palestinian News & Info Agency that Israeli soldiers in military vehicles arrived at dawn, closing all four entrances leading to the town, preventing anyone from leaving, while only allowing entry to its residents.

Israeli Information Center for Human Rights in the Occupied Territories, B’Tselem, stated that Israel imposes restrictions on Palestinian travel within the West Bank, obstructs access to areas where it seeks greater control, and prevents travel between the Gaza Strip and the West Bank.

‘Israel’s policy results in real hardships and constant uncertainty in people’s daily lives in terms of everyday tasks such as getting to work or school or visiting relatives. It also reflects the view that freedom of movement is not an inalienable right but a privilege that Israel can choose to bestow or withhold, ‘ the group further stated.

‘Israel’s policy [of restricting movement] is a blatant discrimination based on ethno-national origin since these restrictions apply only to Palestinians. Jewish residents are permitted to move about freely in areas where Palestinian movement is restricted. Thus, Israel ‘s policy violates the right to equality that is prescribed in all the human rights conventions to which Israel is party.

According to a 2013 report by the United Nations Office for the Coordination of Humanitarian Affairs (OCHA) the number of obstacles to movement inside the West Bank increased to 542 during 2013 from 529 in 2012.