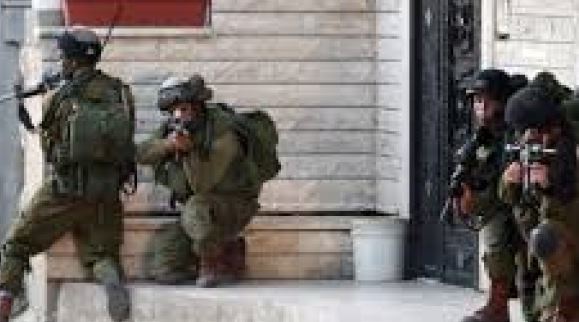 Israeli soldiers kidnapped, on Monday at dawn, ten Palestinians in different parts of the occupied West Bank, and three children in the al-‘Isawiyya town, in occupied East Jerusalem. Soldiers also invaded various communities in the West Bank.Media sources in the northern West Bank city of Nablus said the soldiers kidnapped four Palestinians in Aseera town, north Nablus, after searching their homes, and a fifth Palestinian in the Askar al-Jadid refugee camp, east of the city.

The sources said the soldiers kidnapped Abu Jamal Yassin, 22, Osama Hasan ash-Showly, 21, Mohammad ‘Aasi ash-Showly, 21, and Nidal Hamadna, 23 years of age, after breaking into their homes, and violently searched them.

Soldiers also invaded the ‘Askar al-Jadid refugee camp, and kidnapped a political leader of the Islamic Jihad, identified as Yassin Abu Lafah, 24, an advocate for the rights of Palestinian political prisoners, held by Israel.

They invaded and searched several homes in the refugee camp, and interrogated dozens of local youths.

In related news, soldiers sealed all four entrances of the ‘Azzoun town, east of the northern West Bank city of Qalqilia, before invading it from the western side while firing gas bombs, and concussion grenades.

The soldiers broke into and violently searched several homes in the town, and prevented the Palestinians from entering or leaving it.

In Bethlehem, several military vehicles invaded Beit Fajjar town, south of the city, and searched homes before handing three Palestinians military orders for interrogation in the Etzion military base.

The soldiers also invaded the home of Mohammad Ismael Khalayla in the town, before searching it, and installed roadblocks on the main entrances of Sa’ir and Halhoul nearby towns, and the northern entrance of Hebron city, before stopping and searching dozens of cars, and interrogated the Palestinians while inspecting their ID cards.

Israeli soldiers conduct daily invasions and arrests in different parts of the occupied West Bank, and in several neighborhoods in occupied East Jerusalem.