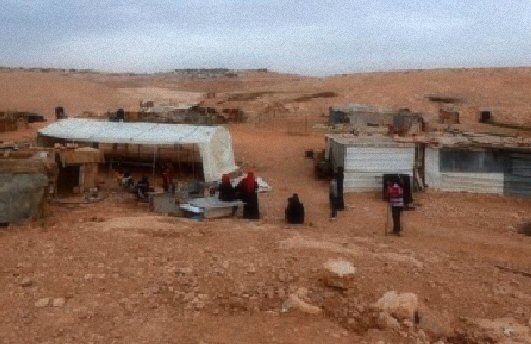 Israeli authorities, on Wednesday, demolished a number of steel structures belonging to Palestinian citizens of Israel, in the Negev-region village of al-Araqib, for the 80th time in a row.Ma’an further reports that Israeli bulldozers, escorted by police forces, also demolished a building in the industrial area of Rahat, in southern Israel.

Both towns are populated primarily by Palestinian Bedouins with Israeli citizenship, with al-Araqib in particular being targeted repeatedly, since 2010, for demolition by authorities.

Israel considers al-Araqib and most other Arab villages in the Negev illegal, while, for Bedouins, the region is their ancestral land and they claim the right to live in the area.

Residents of al-Araqib have repeatedly fled into the village cemetery and lived there after Israeli authorities bulldozed several areas of the town, since they had been assured the cemetery would not be destroyed.

There are about 260,000 Bedouin in Israel, according to Ma’an, mostly living in and around the Negev in the arid south. More than half live in unrecognized villages without utilities and many also live in extreme poverty.

Al-Araqib is among some of the 40 Negev villages Israeli authorities have deemed unrecognized, arguing that the 53,000 Palestinian Bedouins living there cannot prove land ownership.