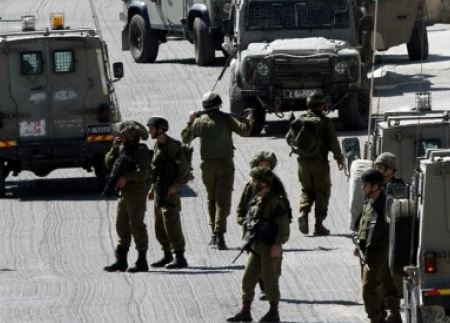 Troops also invaded the home of Anis ad-Dweik, in the town, and violently searched it.

In addition, soldiers invaded the al-‘Isawiyya town, in Jerusalem, and kidnapped Bilal Rabah abu al-Hummus after searching his home.

The army also invaded the home of detainees Samer al-‘Eesawy, his brother Samer and Might and their sister Shireen al-‘Eesawy, in an attempt to kidnap their brother Ra’fat.

In related news, several military jeeps invaded the village of ‘Aboud, near the central West Bank city of Ramallah, and imposed a strict siege on it.

Soldiers also prevented students, from nearby villages and go to schools in ‘Aboud, from entering the village.

Head of the ‘Aboud Village Council Yousef Sa’ad said nearly 40 Israeli military vehicles invaded the village, last night, after surrounding it, and imposed curfew before the soldiers broke into, and searched several homes.