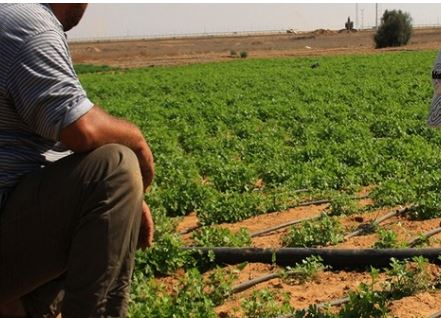 A group of extremist Israeli settlers, accompanied by three bulldozers, invaded Palestinian lands, south of the West Bank city of Bethlehem, and started bulldozing and uprooting them.Coordinator of the Popular Committee against the Wall and Settlements, south of Bethlehem, Hasan Breijiyya, told the WAFA Palestinian News Agency that the setters drove three bulldozers into Khallet an-Nahla area, close to the Efrat illegal colony, and starting bulldozing nearly 30 Dunams of farmlands.

The lands belong to resident Mohammad Yahia ‘Ayyash; it has been repeated invaded, and bulldozed, by the Israeli fanatics.

Breijiyya said the bulldozing and uprooting in the area aims at paving a new road that would lead to an illegal settlement outpost the settlers intend to establish.

He added that, in 2013, a group of armed Israeli extremists, invaded the area and installed a tent, meant to be the foundation of the new illegal outpost.