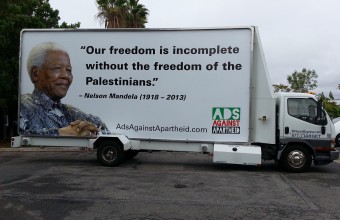 Ads Against Apartheid (AAA) has strongly condemned recent attacks on its advertising campaign, which include vandalism against its partner, a local mobile billboard truck company. In a related incident, an individual stopped the truck, yelled at the driver, and spray-painted a Star of David on the vehicle, according to the Palestinian News Network. The mobile billboard company finally pulled the ads after receiving death threats and reporting $25,000 in damages.

Attacks on freedom of speech related to solidarity with Palestinian are becoming increasingly common in the United States. From the suspension of the Students for Justice in Palestine (SJP) for organizing a pro-Palestinian political group at Northeastern University to the firing of University of Illinois professor Dr. Steven Salaita for tweeting his outrage over Israeli attacks in Gaza last summer, there has been a crackdown on political dissent and freedom of expression related to criticism of Israel.

Board member of Ads Against Apartheid, Richard Colbath-Hess, stated: ‘These acts of violence reflect a broader context of criminalizing and censoring free speech when it comes to opposing US-sponsored funding for Israeli apartheid.’

Ads Against Apartheid is a non-profit organization dedicated to raising awareness about Israeli human rights violations in occupied Palestinian territory. It was created to counter the mainstream media narrative about Israel/Palestine, and to expose Americans to the reality on the ground for Palestinians. Millions of Palestinians live under direct military rule and have no citizenship. Those Palestinians with Israeli citizenship suffer significant economic and institutional discrimination. The US government supplies Israel with over $3 billion a year in taxpayer aid. Some sources cite much larger figures.