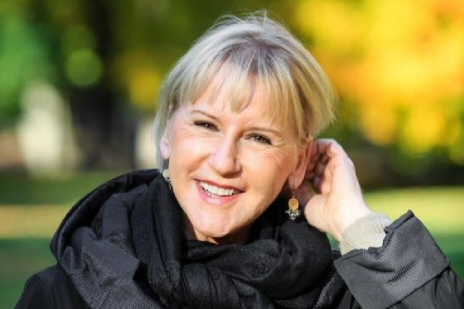 Swedish Foreign Minister Margot Wallström said that Israel is over-reacting to the recognition of Palestine and that Israel’s rhetoric directed against those States who recognized Palestine had crossed all limits. Wallström cancelled a scheduled visit to Tel Aviv earlier this week citing “scheduling problems”.In an interview with the Swedish daily Dagens Nyheter, Wallström responded to the deep-freeze in Israeli – Swedish relations since Sweden’s Social Democrat’s Prime Minister Stefan Lofven said in his inaugural address that his administration aims at a Swedish recognition of Palestine. Wallström said:

“It is unacceptable how they have been talking about us and everybody else. .. It has irritated not only us, but the Americans and everyone who has anything to do with them right now.”

Wallström stressed that Sweden was supportive of peace between Israel and Palestine but that it is sharply opposed to Israeli policies. The Swedish Foreign Minister commented on Israeli’s aggressive policies and the negative impact of Israel’s posturing on the peace process, saying:

Hirschson added, however, that he wouldn’t exactly describe the atmosphere between Israel and Sweden as the best and that this is one of the factors that contributed to the decision to cancel Wallström’s visit to Tel Aviv.

In March 2013 Sweden announced that it would upgrade the status of the Palestinian representation to Sweden to the status of an Embassy. In October 2014 Sweden officially recognized the State of Palestine, prompting the Israeli government to withdraw its ambassador to the Scandinavian country.

The Swedish government sharply criticized Israel for its unprecedented use of military force against the Gaza Strip in July/August 2014.

It is noteworthy that Sweden’s neighbor, Norway, declared the Norwegian Dr. Mads Gilbert, who is Professor and the Clinical Head of the Clinic for Emergency Medicine at the University Hospital of North Norway in Tromsø as Norway’s “man of the year”.

Dr. Mads Gilbert has provided volunteer medical assistance to Palestinians on a regular basis since 1981, after he initially volunteered in an Israeli kibbutz during the 1967 war. It was there that he became acquainted with another reality than the narrative that is generally projected by western media, said Dr. Gilbert.

nsnbc editor-in-chief Christof Lehmann spoke with Dr. Gilbert in 2014, resulting in the article “Law, not Bombs and band Aid – Dr. Mads Gilbert”. Norway was the country that hosted the negotiations which led to the 1993 Oslo Accords. The provisions of the Oslo Accords have since then have been systematically breached by successive Israeli governments.