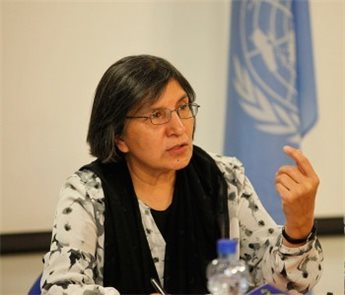 However, all travel in and out of the West Bank and the Gaza Strip is controlled by Israel, and authorities there refused to give her a visa, a statement from the UN High Commissioner for Human Rights revealed.

‘For the past six weeks, I have repeatedly sought the cooperation of the government of Israel to facilitate access to the occupied Palestinian territory for me to undertake this visit. Regrettably, I did not receive the necessary support, including a visa by the Government of Israel, ahead of my travel, which is scheduled for tomorrow,’ Manjoo said in the statement.

‘It is unfortunate that I have been denied the opportunity to engage directly with women survivors of violence, and that the exercise of my mandate has been hindered by the unwillingness of the government of Israel, as the occupying power, to facilitate access to the occupied Palestinian territory.’

‘My intention, as per practice during my country visits, was to support the Palestinian Authority to strengthen its capacity to protect and promote women’s rights and to meet its international human rights obligations,’ she continued.

‘The program of the visit included meetings with Palestinian officials, law enforcement agents, representatives of civil society organisations and survivors of violence in different locations. It also included visits to prisons, refugee camps and shelters for women survivors of violence, among others.’

Despite Israel’s refusal to give her a visa, Manjoo said in the statement that she was still ‘interested in visiting the occupied Palestinian territory,’ calling upon ‘Israel as the occupying power, to facilitate access to the territory,’ Ma’an further reports.

Israel regularly denies visas and refuses entry to those it deems sympathetic to the Palestinian cause, but it relatively rare for authorities to target international representatives with the policy.

In November, Israeli authorities banned the Colombian foreign minister from visiting the West Bank after discovering that she did not plan to meet with Israeli officials as well.

The case came shortly after Norwegian doctor Mads Gilbert, who has famously worked in Gaza hospitals throughout Israeli bombardments, announced that he had banned by Israel from ever returning.