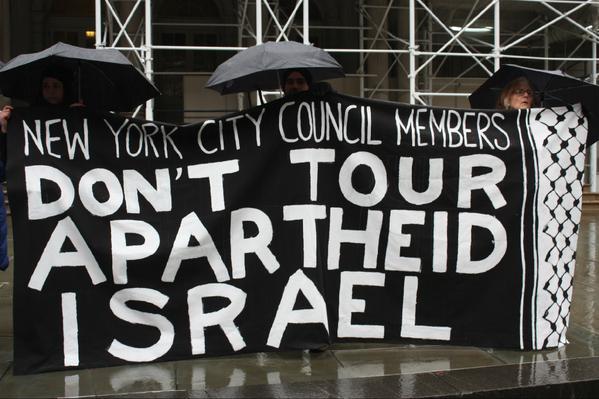 A protest this week in New York City was accompanied by the submission of a petition to the New York City Council demanding that the Council cancel an upcoming all-expense-paid hasbara trip to Israel, funded by the deep-pocketed political advocacy groups ‘Jewish Community Relations Council’ and ‘United Jewish Appeal’.The City Council of New York is considered one of the most progressive in the country, having publicly taken a stand against the targeting of mosques by law enforcement throughout the city, and urging tolerance instead of Islamophobia.

But over a dozen members of the City Council have accepted all-expense-paid trips to Israel beginning February 15th, sponsored by Zionist organizations, whose stated purpose is to bring international visitors, particularly US politicians, to Israel in order to ‘see things from an Israeli perspective’. These trips are considered ‘hasbara’, which is the Hebrew for public relations, and is often referred to by anti-apartheid activists as a type of Zionist propaganda that whitewashes and downplays the Israeli occupation and takeover of Palestinian land.

Representatives of the forty community groups that signed on to the petition gathered in the freezing cold outside New York’s City Council to deliver their message this week. The protest was led by Jewish Voice for Peace, and included representatives from the Committee Against Anti-Asian Violence, the Malcolm X Grassroots Movement, the Direct Action Front for Palestine, and Jews Against Islamophobia.

Almost a year ago, in February 2014, the Mondoweiss blog exposed the JCRC as being behind anti-boycott legislation in the New York and other state legislatures, as well as leading the opposition to a boycott of Israeli goods by a coop grocery store in Brooklyn. The legislation in question has targeted academic organizations, like the American Studies Association, who have taken a stand in support of the Boycott-Divestment-Sanctions movement. The legislation has been passed in several states, and it strips the organizations of their funding and status.

The Boycott-Divestment-Sanctions movement is an international movement aimed at pressuring Israel economically to end its occupation of Palestinian land, and allow for equal rights for all people living in the land of historic Palestine, as well as calling on Israel to adhere to international law and signed treaties and conventions.

David Galarza, a Puerto Rican activist, spome at the rally in the freezing rain, and, according to Mondoweiss, ‘likened the four boys killed on the beach in Gaza during Operation Protective Edge to the four girls who died in the bombing of a black church in Birmingham, Alabama; where, he wondered, was Charlie Hebdo-style solidarity in the case of the murdered Baker children? Photographs of the two bombings [Gaza beach and Birmingham church] were held up as Galarza declared his identification with the eight victims, alternating Palestinian and African-American names.’