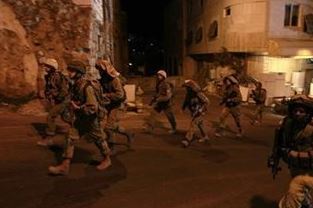 Media sources have reported that three Palestinian workers have been injured, on Sunday at dawn, after Israeli soldiers invaded the center of the northern West Bank city of Nablus.The sources said the soldiers invaded the Shuhada Junction, in the heart of Nablus city, and clashed with local youths.

Soldiers invaded a building in the area, broke into and ransacked several stores, and interrogated a number of Palestinians.

The invasion led to clashes with a number of youths; the soldiers fired rubber-coated metal bullets and gas bombs.

Medical sources said three young Palestinians were mildly injured, and were moved to a hospital in the city, before they were discharged later on. The three work in a local bakery in the invaded building.