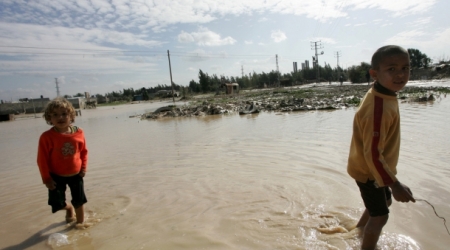 Defense for Children International has described the year 2014 as the most difficult year for Palestinian children, due to ongoing Israeli violations and, mainly, the 2014 summer aggression on the Gaza Strip.According to WAFA, DCI reported on its official website that “Wholesale [Israeli] violations of children’s rights across the Occupied Palestinian Territory led to numerous fatalities and injuries, as well as psychological trauma resulting from collective punishment policies that affected children, such as house raids and demolitions.”

The organization also stated: “At least 11 Palestinian children in the West Bank, including East Jerusalem, lost their lives in 2014 after being shot with live ammunition by Israeli soldiers.”

Furthermore, “2014 will be remembered for the images it broadcasted to the world from the Gaza Strip –during the 2014 Israeli summer aggression on the Gaza]. These images depicted children fleeing from heavy bombing and shelling by Israeli forces, taking shelter with their families in crowded UN schools, or convalescing in Gaza’s overstretched hospitals,” according to DCI.

According to DCI-Palestine’s research, at least 480 children lost their lives in the 50-day military offensive, dubbed Operation Protective Edge; “The children who died made up a fifth of the 2,205 Palestinians who were killed during the conflict.”

Meanwhile, DCI also reported that, “Military detention is a reality for hundreds of Palestinian children each year, exposing them to physical and psychological violence, interrupting education, contributing to mental health issues, and placing large numbers of families under stress. This continued to be the case in 2014.”

It said that, “This year, the average number of children held in Israeli military detention stood at 197 per month, largely unchanged from the 2013 figure of 199 per month. This stable figure, however, masks the undercurrent of change taking place within the system, with a clampdown on Palestinian youth becoming apparent in the second half of 2014.”

Documenting settler violence, DCI-Palestine found that 129 instances of settler attacks against children were recorded between 2008 and 2012.