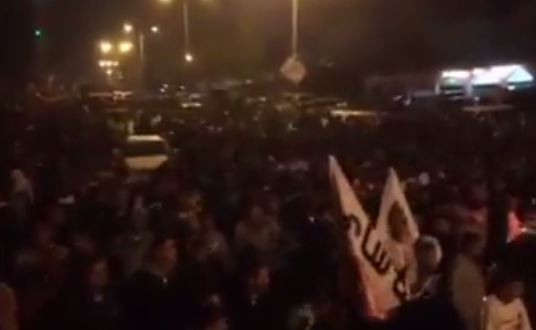 The Arabs48 news website has reported that a Palestinian man was killed, on Sunday evening, during the funeral procession of Sami al-Ja’ar, 20, who was killed by the Israeli Police in the Negev on Wednesday.It said Sami Zabadna, 47 years of age, died due to the effects of tear gas inhalation in Rahat city, in the Negev.

The situation in Rahat is subject to further escalation due to heavy police presence, especially after the death of Zabadna, the second Palestinian to be killed since Wednesday.

The City Council in Rahat decided to hold an urgent meeting to discuss the latest Israeli escalation, and future steps to protest it.

The Arabs48 said the clashes took place on Sunday evening near the Rahat graveyard, and that at least 15 persons were injured.

Dozens of officers were deployed around the graveyard prior to the burial ceremony, an issue that led to tension and clashes with local youths; police and Border Guard units and fired gas bombs at the funeral procession.

Many persons have been hurt, while at least 15 fainted due to extreme effects of tear gas inhalation.

The police also assaulted many residents, including the father of Sami al-Ja’aar, who was killed last Wednesday. http://www.imemc.org/article/70258

The Police said the officers opened fire at the mourners near the graveyard, allegedly after some mourners “fired live rounds into the air during the funeral procession.”

Thousands of persons, including political and social Arab figures, participated in the funeral procession.

The Higher Arab Committee in the Negev declared a general strike that includes all schools in the Negev, to protest the police escalation and violence.