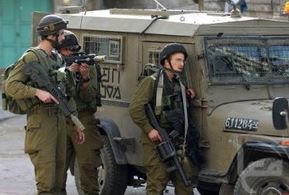 Israeli soldiers kidnapped, on Monday at dawn, a journalist near the central West Bank city of Ramallah, and two brothers in Bethlehem. Soldiers also invaded Hebron, attacked and injured one Palestinian. Media sources in Ramallah said several Israeli military vehicles invaded Betunia town, west of the city, and kidnapped a Palestinian journalist, identified as Mojahed Bani Mifleh from his home.

The Palestinian Journalists Syndicate issued a press release denouncing the arrest, and said the kidnapped journalist works as a news editor for the Social Media Office of the al-Quds University’s Media Center.

It called on various legal and human rights groups, locally and internationally, to expose the ongoing Israeli violations, and pressure Tel Aviv into releasing all detained reporters.

The Syndicate said the army continuously targets journalists and media outlets in occupied Palestine as they expose the ongoing Israeli violations against the Palestinian people.

In addition, soldiers invaded the al-Khader town, south of Bethlehem, and kidnapped two brothers after breaking into their homes and ransacking them.

The two have been identified as Walid Khader Salah, 27, and his brother, Wael, 24 years of age.

In related news, soldiers chased a young Palestinian man in Hebron city, in the southern part of the occupied West Bank.

Local sources said the Palestinian, 21 years of age, was crossing the Shallala Road, in the center of Hebron, when the soldiers started shouting and screaming at him while cocking their guns.

The soldiers tried to hit hm with the rifles, but he managed to escape, and was moved to the Hebron Governmental Hospital suffering a severe trauma and shock.

Soldiers also handed resident Ahmad Othaman Karama, also from Hebron, a military warrant for interrogation in the Etzion military and security base.