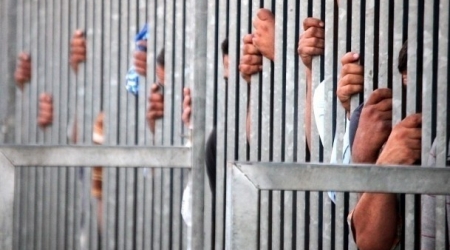 A Palestinian man has been imprisoned in Israel for a total of 33 years, now, a Palestinian prisoner rights advocate has stated.World Bulletin reports, via Al Ray Palestinian Media Agency, that Maher Younis, who hails from the northern Israeli town of Arara, has now completed his 33rd year in an Israeli jail, according to the Palestinian Prisoners Society.

PPS said that Younis was arrested in 1983, as part of a group of other people arrested prior to the signing of the Oslo Accord between Palestinians and Israelis, in 1993.

The accord calls for the release, at the end of March, 2014, of Palestinian prisoners, but Israel has refused to honor this requirement, further impeding and ultimately suspending peace talks with the Palestinians.

Israel had agreed to release Palestinian prisoners detained before the 1993 Oslo Accord in return for a refrain, by the Palestinian Authority, from seeking membership in the United Nations and other international institutions.

The Israeli government, however, has refused to release the prisoners, saying they held Israeli nationality and are, thus, technically Israeli citizens and subject to different laws.

Over 7,000 Palestinians are currently held in Israeli prisons, according to official Palestinian figures.