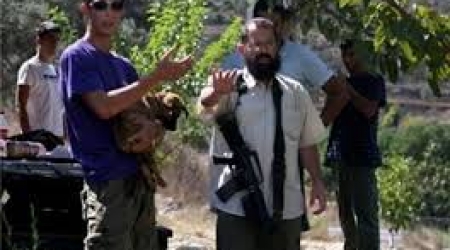 A Palestinian youth was shot and injured, Saturday, by live Israeli settler fire to the south of Bethlehem, while other settlers attacked passing Palestinian vehicles with rocks, to the west, according to local and security sources.WAFA correspondence reports that an Israeli settler opened fire at 25-year-old Mohmmed Asa’ad while he was in his land, near the village of Wadi Rahal, injuring him in the leg. The settler, in addition to two others, previously (and illegally) took over an area of Asa’ad’s land and proceeded to set up tents there.

Meanwhile, a number of settlers from the illegal Israeli settlement of Beitar Ilit, which is a part of the Gush Etzion settlement bloc, hurled stones at Palestinian vehicles passing on the road linking the villages of Hussan and Nahlin to the west of Bethlehem, causing financial damage to several cars.

WAFA notes that settlers have recently escalated attacks against Palestinians through numerous attempts to take over Palestinian-owned land; including the destruction of crops, the pumping of waste water into agricultural land, and other measures aiming to make it difficult for Palestinians to live there, thus forcing them out of their land for the benefit of settlements expansion.

Settlement activities are illegal under international law. From 1967 to late 2012, 125 Israeli settlements were established in the West Bank, with some 500,000 illegal settlers now reportedly inhabiting the area.