Rafah Crossing Closed for Over Half of 2014 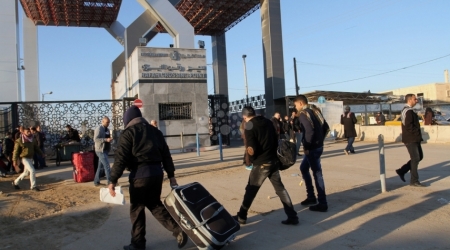 Rafah crossing has been sealed for a total of 241 days during 2014, and opened for only 125, the Border and Crossing Authority reported Sunday.According to Al Ray Palestinian Media Agency, the Interior Ministry’s crossing authority has issued its annual statics reports regarding passenger traffic via Rafah crossing, noting that the crossing was closed for 66% of 2014.

It explained that, out of the 125 days in which the crossing was opened, 51 days were in correlation with the transport of causalities during the latest Israeli military aggression on the region.

Other days were allocated for the travel of pilgrims.

Rafah crossing has been closed since mid 2013, except for three days every two to three months. Most Palestinian travellers were not allowed access because of subsequent restrictive measures imposed by Egyptian authorities.

The statics showed that the total number of passengers who traveled in and out of the Gaza Strip, during the past year, amounted to some 101,442 passengers, with 52,431 leaving and 49,011 entering.

Egyptian authorities banned a total of 4,668 Palestinians from travel.

These statistics reflect a significant decrease in the number of passengers travelling in and out Gaza via Rafah, with the number of travelers in 2013 amounting to three times the count of 2014.

Rafah crossing, which is the only outlet for Palestinians in the besieged Gaza Strip, does not operate to its full capacity, with the most common problem facing Palestinian travelers being that of a network of corruption on the Egyptian side.

The latest statistics revealed by the Department of Registration Authorities shows that the number of registered Palestinians in urgent need of travel amounts to more than 30,000 cases.

Palestinians now make up the largest refugee group in the entire world, according to UN statistics.