Palestinian Injured By Army Fire Near Hebron, One Kidnapped 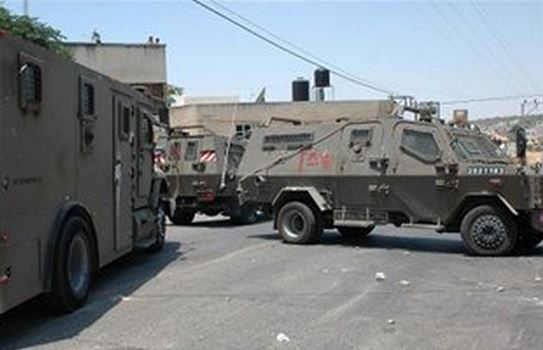 Palestinian medical sources have reported, on Sunday evening, that a young man was injured, and another was kidnapped, by Israeli soldiers invading Beit Ummar town, north of the southern West Bank city of Hebron.Spokesperson of the Popular Committee against the Wall and Settlements in Beit Ummar, Mohammad Ayyad Awad, said the soldiers kidnapped Ma’zouz Ibrahim Awad, 19 years of age.

The young man was kidnapped while heading back home after visiting his brother Ja’far, a former political prisoner currently receiving treatments in the Augusta Victoria Hospital in occupied Jerusalem.

The parents and other family members of Ma’zouz have been denied access to Jerusalem, and were unable to visit their ailing son, who suffered various complications due to the lack of medical attention and treatment while in detention.

In addition, 17-year-old Palestinian suffered various cuts and bruises in the ath-Thaher area in Beit Ummar, after dozens of soldiers invaded it, and chased local youths.

The soldiers also installed a roadblock on the northern entrance of Beit Ummar, stopped and searched dozens of cars, and interrogated the residents while inspecting their ID cards.

Beit Ummar witnesses frequent Israeli military violations, and constant attacks carried out by extremist Israel settlers against the Palestinians, their property and their lands. http://www.imemc.org/newswire?search_text=Beit+Ummar&bu…3E%3E