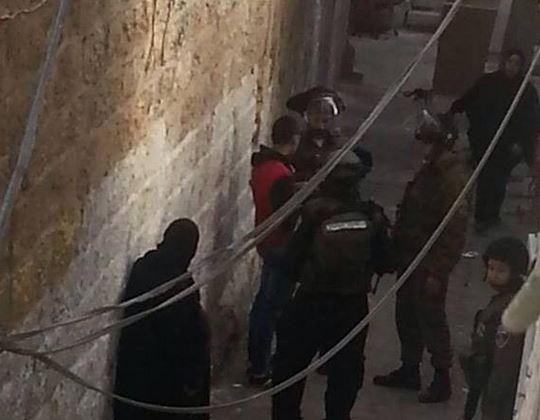 Local sources in Hebron, in the southern part of the occupied West Bank, have reported that Israeli soldiers invaded the city and Beit Ummar nearby town, and kidnapped five Palestinians; Many Palestinians injured. Soldiers also invaded Bethlehem and detained Palestinians near Jenin.The sources said several military vehicles invaded Hebron city, broke into and searched a number of homes, and kidnapped a child, identified as Mohannad Jihad Jaber, 16 years of age.

The soldiers also invaded the Tabaqa nearby village, and kidnapped a child identified as Mohammad Monqeth Abu ‘Atwan, 16, and Yousef Abu ‘Atwan, 18 years of age.

Mohammad ‘Awad, coordinator of the Popular Committee against the Wall and Settlements in Beit Ummar, said the soldiers searched and ransacked homes in al-Baten and al-Bayyada areas, east and north of Beit Ummar, and broke into several homes, causing many children to suffer anxiety attacks.

‘Awad added that the soldiers also kidnapped Ibrahim Yousef Ekhlayyel, 17, and Suleiman Abu ‘Ayyash, 19, and took them to the Etzion military and security base.

The latest arrests in Beit Ummar raises the number of Palestinians kidnapped by the army since the beginning of this month to 38, including 17 children.

Many army vehicles also invaded a number of neighborhoods in Hebron city, and installed roadblocks on the main entrances of Halhoul and Sa’ir town, and on the northern entrance of Hebron city.

Medical sources in Hebron said scores of Palestinians received treatment for the effects of tear has inhalation, especially near the Abu ar-Reesh roadblock in Hebron’s Old City, during clashes that took place after the soldiers invaded it.

In addition, soldiers installed a sudden roadblock on the main entrances of Zabbouba town, west of the northern West Bank city of Jenin, stopped dozens of cars and interrogated the passengers while inspecting their ID cards.