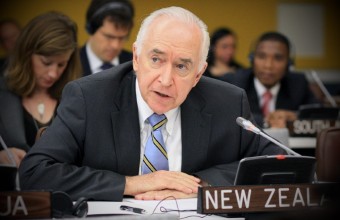 New Zealand has proposed a two-state solution of an official Palestinian state coexisting alongside an Israeli one. New Zealand is now participating, for the first time in two decades, since taking its place in the UN Security Council, according to the PNN.New Zealand’s representative to the council had criticized the UN for failing to show leadership in the ongoing debate and for abdicating its duties. New Zealand’s Permanent Representative to the UN, Jim McLay, told the Security Council that it needed to do more to put an end to the 66-year conflict. He said the most realistic solution would be to recognize two states, in which Palestine would be recognized as an independent state alongside Israel, TVNZ reported.

McLay told fellow members of the council that the current arguments no longer add value and purpose to the matter, even while firmly supporting Israel’s existence.

New Zealand’s proposal comes at a crucial time, when talks of a resolution between Israel and Palestine are rising among Arab states.

However, as Leslie Bravery reports, on behalf of New Zealand’s Palestinian Human Rights Campaign, a US veto on Palestine’s recent UN resolution proposal for permanent statehood did not stop McLay from lauding “the ongoing efforts of the United States to resolve this issue”, or going on to insist that “US leadership is indispensable.”

In assessing the worth of New Zealand’s presence at the Security Council, another assertion by McLay was also reviewed by Bravery:

He commented, “increased radicalization within some Palestinian communities prompts responses from Israel.”

McLay made no mention of the fanatical daily attacks by illegal Israeli settlers on Palestinian agriculture, with their continuous uprooting of olive trees by both settlers and the Israeli military alike.

Furthermore, Bravery points out that ‘UN Security Council Resolution 1860 obliges Israel to open the port of Gaza and to facilitate the free movement of goods and people between Gaza and the West Bank. Bombed-out Gaza residents, struggling to find clean water, remain homeless while Palestinian farms and fishing boats are regularly under fire from Israeli government forces. In the recent freezing weather, two infants have already died from exposure. Devastating levels of unemployment are pushing the population ever deeper into poverty while the Israeli blockade prevents rebuilding. These appalling conditions, quite apart from the suffering under direct military occupation endured by the population in the West Bank, provide undeniable evidence of the complete absence of security for the Palestinian people. Why has the New Zealand representative at the Security Council not demanded action by the Security Council to require Israel to end its ceasefire violations (five already this month alone) and implement Security Council resolution 1860?’

US Secretary of State and Middle East Quartet member John Kerry is also reportedly an advocate of a two-state solution, ever insisting on further formal negotiations between Palestinian and Israeli officials to achieve peace in the region, while simultaneously backing increased illegal settlement expansion efforts and further colonial strategies imposed by the Israeli government.