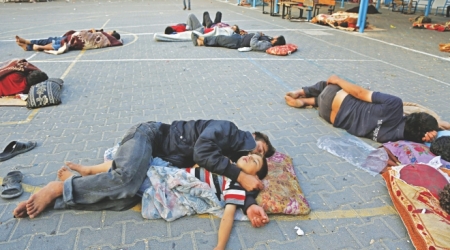 Palestinians angry at their deterorating living conditions in the Gaza Strip stormed the United Nations headquarters to protest UNRWA’s announcement to suspend its cash assistance program for the homeless families.Anadolu news agency reported, according to WAFA, that angry Palestinians demonstrated opposite to the UNRWA headquarters, which houses other UN agencies’ offices, burning tires, and proceeding to storm the headquarter, throwing stones at the compound’s gate and smashing its windows.

Organized by the National Commission for Breaking the Blockade and Reconstruction, the protest saw hundreds of homeless Palestinians condemning UNRWA’s announcement that it could not afford to fund repairing tens of thousands of houses demolished or destroyed during the latest deadly Israeli onslaught on the strip.

“The international community and Arab states who pledged to fund Gaza reconstruction are fully responsible for any consequences that could happen as a result of the UN agency’s decision,” said Spokesperson for the Commission Adham Abu Salmia.

Abu Salmia called on the UN Secretary-General Ban Ki-moon and Palestinian Authority to take an immediate action to save Gaza from this catastrophic situation.

Israel waged its latest onslaught on the Gaza Strip throughout the summer of 2014. During the time, over 2,200 Palestinians were killed, mostly unarmed civilians, while another 11,000 were injured, according to the Ministry of Health.

Arab and world countries pledged to offer $5.4 billion; half of it to reconstruct the Gaza Stripand the other to meet the needs of Palestinians and the Palestinian Authority’s budget.