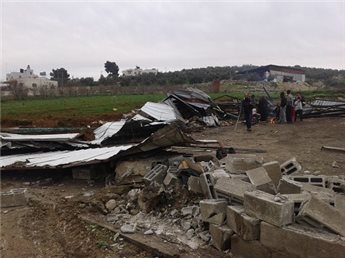 Israeli authorities, on Thursday, destroyed the home of a Palestinian family, in addition to a barn located in Ethna, near Hebron, in the southern West Bank.Locals told Ma’an News Agency that Israeli bulldozers, escorted by a number of military jeeps, demolished both a house and a mobile home belonging to Ahmad Jamal al-Jiyawi, in the area of Khirbet al-Ras, to the west of Ethna.

Local residents said that the structure belonged to a man supporting a family of 10, most of whom are children.

Israel rarely grants Palestinians permits to build in West Bank areas under their control, or about 80 percent of the total land area, and regularly demolishes structures built without permits.

Ma’an further reports that, according to the UN, Israeli bulldozers demolished at least 590 Palestinian structures in the occupied West Bank and East Jerusalem in 2014, displacing 1,177 people.