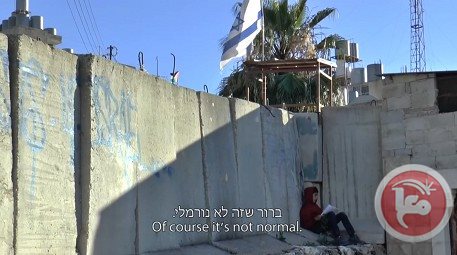 The short documentary ‘Khelil Helwa (Hebron is Beautiful)’ follows a young boy from Hebron’s Tel Rumeida neighborhood as he goes about his daily life, uncovering the matrix of Israeli military control that defines every aspect of life in the occupied West Bank.For Palestinians, the footage may at first appear somewhat unremarkable, and the scenes of soldiers barking orders and even arresting the film’s 15-year-old star, Awni Abu Shamsiya, are heart-breakingly familiar.

But for Israeli-American filmmaker Yuval Orr, it was the hope of showing the footage to Israeli audiences that motivated production.

‘I want Israelis to see more films that challenge what they think they know, or challenge the moral stance that is very easy to take at a distance,’ he told Ma’an News Agency during an interview in West Jerusalem.

‘How many Jewish Israelis really go to Hebron if they’re not soldiers or settlers?’

‘Quiet before the storm’

The film, which was produced as part of the ActiveVision film collective, spans a mere nine-and-a-half minutes but manages to offer a complex and insightful look at daily life in central Hebron through the eyes of one of the city’s own children.

‘Khelil Helwa’ is surprisingly unburdened by statistics, maps, or figures, allowing the potential viewer — particularly if Israeli — to sympathize with Awni’s perspective regardless of their political perspective.

And while Orr concedes that this approach risks depoliticizing the inherently political nature of the struggle facing young Palestinians like Awni, he argues that it also opens up other opportunities for outreach.

‘All of the words that we use to describe the ‘conflict,’ the ‘occupation,’ or the ‘situation’ are extraordinarily flawed, and as hard as you try to remain objective with language, its very difficult,’ he told Ma’an.

He said he did not want to ‘color viewers’ perspectives and allow them to shut down, or be primed for a film they are going to identify with.’

Instead, by allowing the viewer to experience Awni’s life directly and without introduction, he said the the film forces them to confront the humanity they share with the teen.