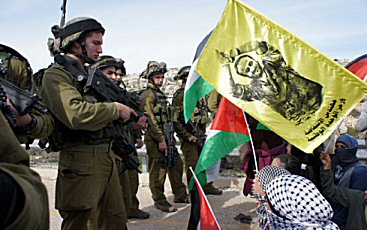 On the morning of February 5, ISM volunteers travelled with around 50 Palestinian activists from the Salfit area to the village of Kafr ad Dik to take part in an olive tree planting action organised by the Joint Council of Salfit (a newly formed coalition which includes a group of municipal councils in the Salfit area and the Palestinian Youth Union).

The mood in the coach travelling over was upbeat and defiant. Local youth and women, who together formed the majority of participants, sang and discussed the importance of the tree-planting.

Ninety per cent of the village land of Kafr ad Dik lies in Area C of the West Bank; buildings erected (post-1967) or trees planted are liable to demolition and destruction by Israeli Forces at any time, in contravention of the Fourth Geneva Convention. In an area where the majority of the population are dependent upon agriculture for their livelihood, these illegal acts of destruction and the constant threat of future destruction have a devastating effect on the people´s economic and psychological wellbeing.

The people of Kafr ad Dik also have to contend, as do other villages throughout the Salfit area, with the presence of the illegal Israeli settlements. The Salfit region has a Palestinian population of 60,000, distributed among the 19 villages and one major town, but the aggressive expansion of the illegal settlements in the area means that the indigenous population is now outnumbered by the settlers – one settlement alone, Ariel, has a population of 40,000.

The mayor of Kafr ad Dik told ISM that Salfit is a target for aggressive settlement expansion because of the area´s water resources: it contains the second largest aquifer in historical Palestine. However, the villages have to pay for water to be imported from Israel as they are not allowed to drill wells. The strategic location of Salfit is another factor – the continued expansion of settlements in the region could divide the West Bank, completely isolating the north from the south. Elaborating on the impact which the illegal settlements are having on his and neighbouring villages, the mayor referred to the frequent attacks by settlers who destroy olive trees, and the health problems in the area, which he linked to the pollution from the illegal industrial settlement of Ale Zahav.

120 olive tree saplings, provided by PARC (Palestinian Agricultural Relief Committee), were planted in Area C, were planted in Thursday’s action as an act of agricultural resistance. Fayiq Qeshawe, one of the coordinators, told ISM that this was the first in a planned programme of such activities, all of which are intended to empower local communities and help maintain the indigenous population´s presence on, and ownership of, their land. As Majd, a sixteen-year-old from Salfit town, told ISM on the way back to from the action, ¨Today we have all come to volunteer as the olive is so important for the history of Palestine and to plant the olive is to prove that we are here, that this is our land.¨