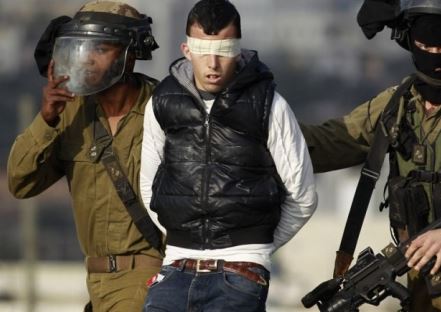 Israeli soldiers kidnapped, on Tuesday at dawn, eight Palestinians, including a 12-year-old child, in the occupied West Bank, and Jerusalem, during military invasions into several Palestinian communities.Media sources in Hebron, in the southern part of the West Bank, said that soldiers invaded Jabal Johar area, and kidnapped a 12-year-old child identified as Mahmoud Mohammad Jaber, in addition to Rabah Abdul-Wahab Abu Odah, 19, and Ayman Radwan az-Zaghal, 30.

The sources added that the soldiers stormed homes in Halhoul nearby town, and kidnapped ‘Odai Ali Zama’ra, 19, and Abdul-Qader Musallam ad-Douda, 30.

Dozens of soldiers also invaded various neighborhoods in Hebron city, installed roadblocks on the northern entrance of the city, and the main entrances of Sa’ir and Halhoul town, before stopping and searching dozens of cars, and interrogated the passengers.

The soldiers also invaded a number of towns and villages in the northern West Bank district of Jenin, and installed roadblocks before searching dozens of vehicles and interrogating the passengers.

In occupied Jerusalem, soldiers invaded Jabal al-Mokabber town, south of the city, and kidnapped Kathem Abu Sbeih, 17, and Majd Shqeirat, 19, after invading their homes and searching them.

The Palestinian TV said the soldiers declared the entire area a closed military zone and prevented even journalists from entering it.