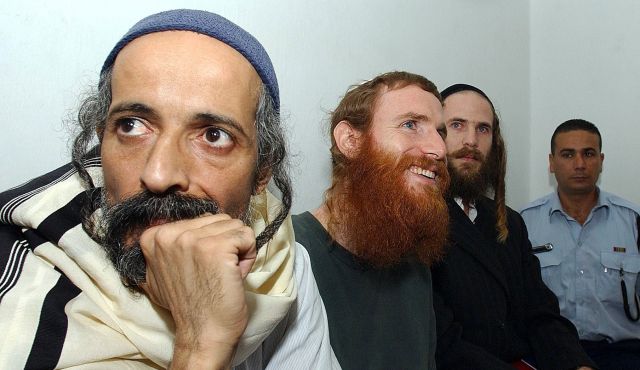 A Jewish Israeli extremist who was sentenced to 15 years in prison in 2002 for constructing and placing a bomb to kill Palestinian children will be released this month, two years ahead of schedule, according to Israeli sources.Ofer Gamliel and his accomplices Shlomi Dvir and Yarden Morag were members of the paramilitary group ‘Bat Ayin Underground’, made up of extremist right-wing settlers from the Hebron area. The three men put together a bomb and placed it in a baby carriage at the entrance to a girls’ school in Jerusalem, with the hope to maximize civilian casualties when it exploded. They set the bomb to detonate at 7:20 am, just as the girls would be arriving for school. Police arrived on the scene in time to defuse the bomb before it exploded.

According to Professor Michael Rubner’s review of Ami Pedahzur and Arie Perliger’s study of ‘Jewish Terrorism in Israel’, the Bat Ayin Underground were ‘a network of young and religiously observant third-generation West Bank settlers, Bat Ayin activists ignored Israeli authorities by establishing communal farms on West Bank hilltops, hoping to lay the foundation for a theocratic state based on Jewish religious law. Beginning in early 2001, members of the Underground initiated two types of attacks: firing at Palestinians in passing cars and placing explosives in public buildings, especially schools, in Arab villages around Hebron and East Jerusalem. ‘

Two of the three men received 15-year prison terms, while the third, Yarden Morag, has already been released after his 12-year term. In 2006, the men’s appeal of their case reached the Israeli High Court, which ruled against them and upheld their sentences.

One of the judges that made that ruling stated, ‘The goal of the accused – which by miracle was not carried out – was to cause deaths of students and innocent bystanders, just because they were Arab. They [the three] did everything they could to carry out their criminal mission. The attempt to cause the deaths of many people, especially of students who are innocent of any crime, demands a severe punishment.’

Numerous human rights groups have pointed out the large disparity in sentencing between Palestinians who carry out attacks on civilians and Israelis who do the same, noting that the latter receive much lighter sentences and are often released early.

While he was in prison, Ofer Gamliel’s son was wounded in a 2009 attack by a Palestinian man suffering a psychotic break. The Palestinian man entered the settlement of Bat Ayin and began attacking people randomly with an axe, killing one and wounding several others. One of those wounded was Gamliel’s 7-year old son.

Given that his stated motivation in the 2002 attack was ‘revenge’, analysts have pointed out that this motivation may well have increased following the 2009 attack in which his son was injured. This was not mentioned in the parole board’s decision to release Gamliel back into the Bat Ayin settlement.

Bat Ayin is a controversial colony constructed on stolen Palestinian land in the Hebron area. Settlers who live in the colony are known for their right-wing views, with many of them gathering annually to celebrate the 1994 massacre of 29 Palestinian civilians in the Ibrahimi mosque by American Baruch Goldstein.

It was the site of a 2012 firebombing attack on a Palestinian civilian car which badly burned six members of one family. Two unnamed boys, aged 12 and 13 at the time, were reprimanded by the Chief Rabbi of the colony for carrying out the attack, but they did not receive punishment beyond the reprimand.