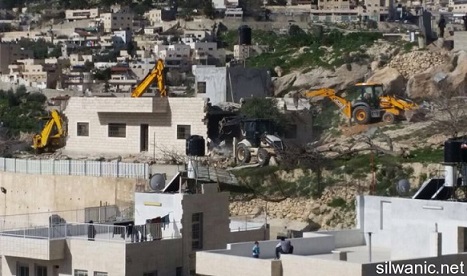 The Wadi Hilweh Information Center in Silwan (Silwanic), said the family never received a prior notice regarding date of the destruction of their property, deemed illegal by the Jerusalem Municipality for ‘built without a construction permit.’

Silwanic said four military bulldozers, and several army and police vehicles, invaded the neighborhood and demolished the home without even allowing the family to remove its belongings.

Fourteen family members, including seven children, lived in the 200 square/meter recently constructed home, at a cost of around 700.000 New Israeli Shekels.

The soldiers also assaulted several members of the al-Abbasi family, and forced them out of their home, in addition to attacking them while demolishing their property.

Al-‘Abbasi said the army first broke into the building while it was still under construction, and several times afterwards, and handed an administrative order for its destruction, but did not demolish it as the family took the case to court.

A court hearing, filed by the family against the City Council, was supposed to be held next week, but the army decided not to wait.

While the fanatics stormed the mosque, the army escalated its measures, preventing men from entering it, and withheld the ID cards of women and boys before allowing them into the mosque compound.

The fanatics were touring while carrying maps and leaflets, given to them by their guides, who presented their ideology regarding destruction of the Mosque “to rebuild the temple.”