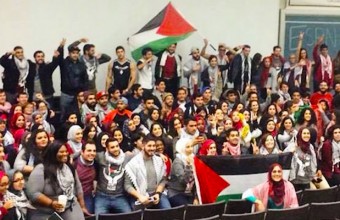 The Palestinian Authority has decided to completely ban all products of six Israeli companies from the Palestinian market, as a response to Israel tax-freeze move.Any product manufactured by Strauss Group, Tnuva, Osem, Elite, Prigat and Jafora-Tabori will be banned in the West Bank markets as of February 11, according to the Palestinian News Network (PNN).

The amount of tax revenue frozen by Israel has now reached some $227 million (December 2014 – January 2015), in response to President Mahmoud Abbas’ accession to 20 international treaties, including the International Criminal Court (ICC).

Abbas’ ICC move came following a United Nations rejection of a draft bill calling for an end to the Israeli occupation and the establishment of the Palestinian state by 2017.

Israel’s retention of PA’s tax revenues has resulted in an inability to pay for civil servant wages and pensions for the second month in a row.

According to WAFA news agency, member of the Fatah Central Committee, Mahmoud Al-Aloul said Monday that the Palestinian Authority is planning to ban the entry of products manufactured by six Israeli companies for consumption in the West Bank market.

Al-Aloul says the decision comes in response to a recent surge in Israeli violations, on top of the takeover of large tracts of Palestinian lands, for settlement purposes, and in addition to Israel’s illegal freeze of Palestinian tax revenues collected on behalf of PA.

In related international news, the University of California student government resolution to boycott Israel passed 8-2, last week, formally recommending the university to divest from US companies which conduct business with Israel, the Washington Times reported on Tuesday.

Pro-Palestinian students at the UC Davis celebrated after a student government body vote to boycott Israel was passed overwhelmingly at the school.

The vote was championed by the Students for Justice in Palestine (SJP) which is part of the Boycott, Divestment and Sanctions (BDS) movement, which seeks to exert economic pressures on Israel and to end the occupation of Palestine, and supports the right of return.

The boycott campaign against Israel began in July 2005 by 171 Palestinian organizations, which calls for ‘various forms of boycott against Israel until it meets its obligations under international law,’ Press TV reported.

During the recent Israel war against the Palestinians in the besieged Gaza Strip, Israeli warplanes targeted a number of schools and hospitals in defiance of the Geneva conventions that ban such attacks. More than 2,200 Palestinians, over 500 of them children, lost their lives during the Israeli offensive.