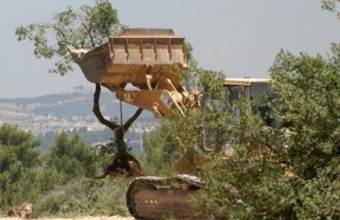 Israeli forces, on Tuesday, demolished the home of a Palestinian family in the historic city of Lydda, in addition to another in Jerusalem’s Silwan district. A number of Palestinian-owned trees were uprooted during the action.Israeli forces closed all entrances to the property and forcibly evacuated the al-Naqib family, before demolishing the home, according to Ma’an News Agency.

Hundreds of Palestinian residents gathered to support the family, with dozens of Israeli security personnel present at the demolition.

The home belongs to Hana al-Naqib, where she lives with her four children.

The al-Naqib family received a demolition order for the home in late 2014, which claimed that the property was not registered with the appropriate Israeli ministry.

A lawyer for the family, Qais Nasser, requested an urgent appeal to the court demanding that the demolition be postponed, but the appeal was rejected.

Family member Nabil al-Naqib told Ma’an that the family has all the required documents that ‘prove that the land belongs to the family and is licensed for building’.

‘The family was planning a sit-in protest in front of the house to protest the demolition order, but a large force of Israeli police and bulldozers arrived and demolished the house,’ he added.

Another family member, Maha al-Naqib, said that the land has belonged to the family to the creation of the Israeli state in 1948, and that the homeowner could not appeal the court decision due to financial difficulties.

Before 1948, Lydda, or Lod, as it is now commonly reffered to, was a mixed town of Palestinian Muslims and Christians.

Thousands of Palestinians were forcibly displaced from the town by Israeli forces during the 1948 war, and dozens were killed.

Israel’s 1.3 million Palestinian citizens, who make up just over 20 percent of the Israeli population, are the descendants of 160,000 Palestinians who managed to remain on their land when the state of Israel was established in 1948.

Also on Tuesday, Israeli bulldozers demolished the home of the Abbasi family in the Sweih neighborhood of Silwan Village, occupied East Jerusalem, under the usual pretext of having no building permit.

Popular struggle coordination committee activist, Hassan Breijiya, told PNN that two bulldozers and 6 ‘civil administration’ jeeps went to bulldoze the land, claiming that it was ‘state property’ (another common pretext for such demolitions).

The olive trees and fences were destroyed in the process.