“Gaza on Verge of Collapse” 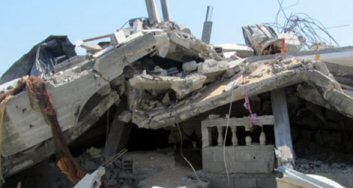 The failed reconstruction process in the Gaza Strip is inextricably linked to Israel’s ongoing seige of the coastal enclave. The UN announcement last month that unfulfilled donor pledges mean it has no more money for reconstruction has further exposed the reality in which accountability and transparency are lacking in international aid. Aid Watch Palestine explains what can – and is – being done to change this reality.At least 100,000 Palestinians are still living without adequate shelter more than five months after the end of Israel’s summer attack on the Gaza Strip. Gaza is home to 1.8 million people, and Israel’s attack on the coastal enclave left at least 30,000 houses either fully or partially damaged, representing almost one third of all the homes in Gaza.Besides homes, many schools, hospitals, and water facilities remain in ruins after being targeted and destroyed or damaged this summer.

In the context of such devastation, UNRWA’s announcement last month that it had run out of aid money for Gaza’s reconstruction process rightly provoked a wave of anger that flooded onto the streets in several demonstrations against the international community’s lack of assistance to the people of Gaza.

Yet to paint the announcement itself as the crisis– implying that the reconstruction process had been working up until now– is misleading, according to many people in Gaza.

While $200 million in aid was pledged by donor countries to rebuild the strip shortly after this summer’s war, only 5 percent of this money actually reached Gaza, according to the United Nations Development Program (UNDP), though it is unclear exactly where the money has gone.

An additional $5.4 billion in aid was further pledged in October at a donors’conference in Cairo, though according to UNRWA’s Director in Gaza Robert Turner, “virtually none of [the $5.4 billion] has reached Gaza.”

“Right now we have to dig under a rock to find any information about the aid we’re supposed to be getting and where that money actually is,” said Omar Shaban, a resident of Gaza and one of the initiators of Aid Watch Palestine.

“We hear over and over again that someone new was just hired for $50,000 or that so many people are committed to helping, but then we see no change,” he continued. “It’s as if you were to go into a big kitchen and there were 20 people there trying to cook, and then there was no food.”

Frustration regarding this lack of action and information is precisely what inspired Shaban and Nora Lester Murad to start the initiative Aid Watch Palestine (AWP) this summer, holding the belief that the international aid system needs to be dramatically restructured in order to actually assist the people of Gaza. The two describe AWP as a hybrid between an aid monitoring mechanism, a community engagement effort, and an advocacy campaign and think tank. AWP currently has a Facebook page and a small staff and network of volunteers though the initiative has yet to officially launch.

On the eve of the U.N.’s announcement of suspending its UNRWA agency, Sarah Levy spoke with three members of Aid Watch Palestine about their work, the aid situation in Gaza, and their hopes for the future of Palestine.

Heba Alhayek is a student of English Literature at the Islamic University of Gaza, and the Social Media and Community Organizer for Aid Watch Palestine (AWP) in Gaza.

Nora Lester Murad and Omar Shaban are two of the initiators of AWP based in Ramallah and in Gaza respectively. Omar Shaban is also the director of PalThink for Strategic Studies.

Sarah Levy: What is the goal of Aid Watch Palestine?

Nora Lester Murad: The long-term goal is to improve international aid so that it helps Palestinians to claim rights and to further a just and peaceful solution. Seeing as that’s a big goal, to start we’re focusing first of all on Gaza, and second of all on transparency. Transparency is one big step toward accountability because you can’t have accountability without transparency.

SL: What are you working on now?

Heba Alhayek: In Gaza we hope to hold meetings and workshops with locals to raise their awareness about the issue. We have also begun to train a group of writers who can collect stories from Gaza that can be shared with the rest of the world. These are stories about people who were affected by the last aggression on Gaza, people who are living without houses or shelters.

NLM: Besides this our work mainly consists of beginning to collect and compile research to get a better sense of where the aid has come from starting in October 2012, what it was for, where it has gone, and what were the parties it touched before reaching its destination. But the ultimate goal is to transform or liberate international aid so it actually is helpful.

SL: Can you describe the situation today on the ground in Gaza? How different are things today from how they were when Israel stopped its bombing campaign on 26 August?

Today, after this summer’s war, people are still living under trees or amongst the ruins of their destroyed or damaged homes.

Omar Shaban: There has not been a single big project built since this summer. No homes or schools or hospitals. The reconstruction has effectively been non-existent. Gaza is in need of 1.5 million tons of cement and so far only 27,000 tons have been allowed in.

This cement was only allowed for instances of minor damages, for about 17,000 people. On top of this the people who got this cement were forced to pay with their own money for it, told they would be compensated later. Of course this has not happened.

Students cannot get to school, parents are not working, and many people cannot even afford food. This is a huge social problem. So in some ways the consequences of the war are more destructive than the war itself. Gaza is on the verge of collapsing.

SL: What are your reactions to the recent UN announcement that they have run out of money for aid?

NLR: Personally I think that the UN announcement is actually in a way a positive thing. To come out and say that the UN can’t go forward, I think that’s great. I think that’s exactly what’s needed—a time out, to say that the UN is not going to keep pretending. The fact that they’ve been pretending for so long that things are actually getting better is what’s problematic, so to at least recognize that right now the way the aid system is set up is making reconstruction impossible and not helping the people of Palestine is important.

SL: Why do you think the reconstruction process has been stalled so far?

NLM: I think there are several factors. Of course the ongoing rift between Fatah and governments in Gaza since the unity deal [in April 2014] is a factor because in order to really rebuild Gaza – and here we’re not just talking about a few houses here and there, but entire neighborhoods — it would take government planning, which at this point is not moving forward.

Then there are Israel’s restrictions, which are obviously problematic. The blockade and of course the occupation are huge issues that not only affect the reconstruction but everything else in Gaza.

Personally, though, I would put a majority of the responsibility on the international community because by upholding a façade that things are working when they’re not, this is in effect another kind of complicity, to which I think the main antidote is transparency. I think it’s the lack of transparency that directly contributes to people continuing to not get the help they deserve.

OS: In Gaza, we feel that the UN mechanism has replaced the Israeli siege. The UN has taken responsibility from the Palestinian Authority to help the people of Gaza and now no one is being helped. Meanwhile, the PA is simply hiding behind the UN rather than taking responsibility for its own people. The PA is trying to manage the Gaza crisis from Ramallah, which is no way to get anything done.

And the UN refuses to seriously cooperate with local partners on the ground. The UN serves us without giving us the right to hold them accountable. If you have authority, you have to be responsible. The UN has the authority without the responsibility.

Then you have European countries which do not want to invest again in something that their money rebuilt in 2008, 2009 and 2010. They think, ‘why do I need to rebuild something that was rebuilt with my money just a few years ago?’

HA: This is why we are looking to local society. We think that the people who are affected the most must engage in their own development process because they are the only ones who really know what they need.

SL: I’ve heard mention of Israel actually benefitting from the aid money being pledged. Can you explain how or why?