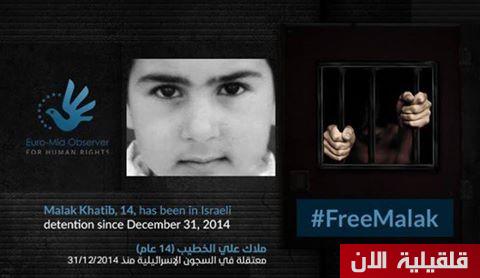 The Israeli Authorities released, on Friday noon, the youngest Palestinian detainee, Malak al-Khatib, after holding her captive since December 31, 2014The child was moved to the Jabara Israeli military roadblock, south of the northern West Bank city of Tulkarem, where her family and dozens of residents received her.

Malak was held in the HaSharon Israeli prison for women, and faced very difficult conditions during her imprisonment, in addition to being interrogated without a lawyer or the presence of any family member.

Her family was never allowed to see her, and were prevented from talking to her during the court session. http://www.imemc.org/article/70324

Malak al-Khatib to be Released on Friday
http://www.imemc.org/article/70562