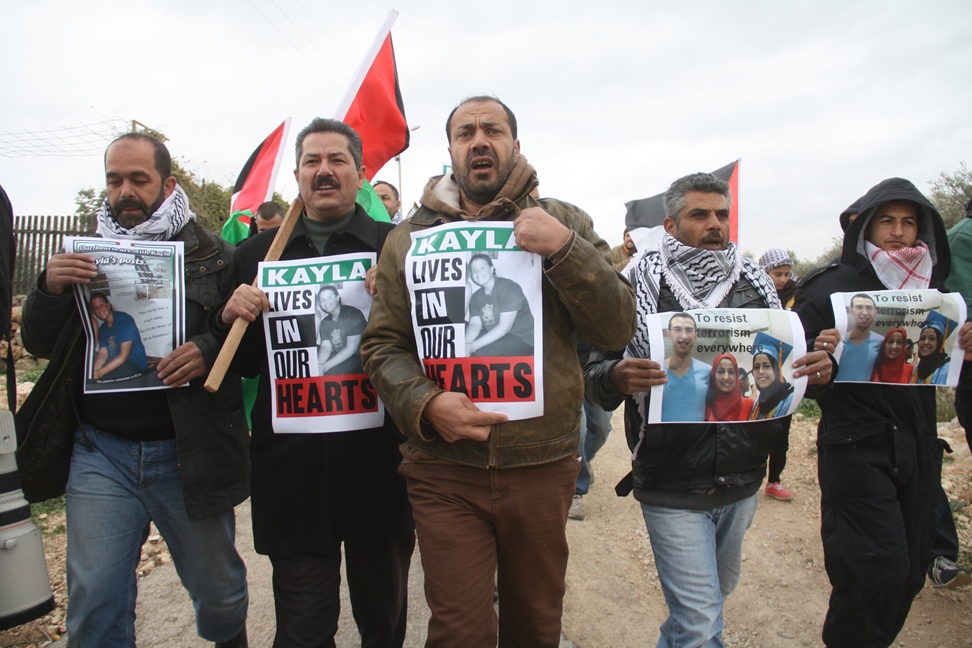 The Popular Committee Against the Wall and Settlements in Bil’in, near the central West Bank city of Ramallah, has reported that Israeli soldiers assaulted the weekly nonviolent protest wounding at least ten Palestinians, and kidnapped two.The Committee said the soldiers sprayed the protesters with gas wounding its deputy head Jamal al-Barghouthi, in addition to the head of the Popular Resistance Coordination Committee in Palestine, Monther ‘Amira, Abdullah ‘Oleyyan, Kifah Mansour, Mohammad al-Khatib, a photojournalist working for al-Hayat newspaper, Issam Rimawi, two Israeli peace activities, and two activists from Denmark and Holland.

Soldiers also assaulted and kidnapped Mohammad al-Khatib, member of the Popular Committee, and an Irish activist, and took them to an unknown destination after violently cuffing and blindfolding them.

The protest stated following noon prayers in the village, and the protesters marched carrying Palestinian flags, and pictures of Kayla Mueller, who was killed by ISIS in Syria.

The protesters also carried pictures of Yusor Abu Salha and Razan Abu Salha, who were killed along with Deah Shaddy Barakat, who were all killed in North Carolina by Craig Stephen Hicks.

They raised signs and chanted against terrorism in every part of the world, and for true justice, liberation, peace and equality.

Coordinator of the Popular Committee Against the Wall and Settlement, Abdullah Abu Rahma, delivered a speech condemning the murder of innocent persons.

“Terrorism that killed Rachel Corrie is the same terror that killed Kayla Mueller, Yusor and Deah,” Abu Rahma said, “The attacks we faced today while marching against terrorism, are part of this extremism and violence.”

Abu Rahma also stated that the Palestinians, their Israeli and international supporter, will continue their activities against the illegal Israeli occupation, and its colonies in Palestine, adding that next week’s protest, on February 20, will be marking 10 days since the beginning of popular resistance against the wall and settlements in Bil’in.