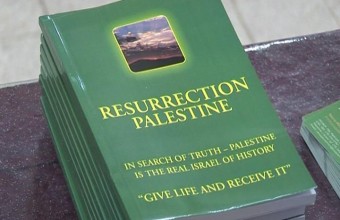 The Jesus Christ Embassy, in Jericho on Thursday, launched the campaign ‘One Million People Pray for Jerusalem Peace’, with the aim of restoring the lost rights of Palestinians and repairing the understanding of Bible teachings.Head of the organization, Terry McIntosh, had given a lecture defining the ancestors of Palestinians as the ones who were originally called ‘Israel’. The campaign refers to professional academic research and DNA tracing, which McIntosh detailed in his book ‘Resurrection Palestine’ in orde to bring out the relations between Palestinians and Jews.

The book demonstrates historical and religious evidence proving that the name ‘Israel’ was originally the name of prophet Jacob’s son, which Palestinians are descended from. ‘Israel’ is also biologically related to the children of Judah, ‘father of Jews’, who were associated in the South. The book also proves that the Israelis now are not all descendants of Judah.

Therefore, PNN reports, this is a religious message based on the bible, which can affect politics.

The book quotes the promise of God through Jeremiah 31:9 ‘They will come with weeping; they will pray as I bring them back. I will lead them beside streams of water on a level path where they will not stumble, because I am Israel’s (Jacob’s) father, and Ephraim (Palestine) is my firstborn son.’

There are many other scriptures that expose truth of the Palestinian connection to the land and the promises of God.

‘When the Jewish state was formed in 1948, they took to themselves the name Israel, which created a false illusion that they represented the people of Israel when in fact, the name belongs to the Palestinian people,’ McIntosh said during the conference.

McIntosh’s ‘Resurrection Palestine’ states: ‘The Bible record is very clear. The name ‘Israel’ was applied to the sons of Joseph and the Bible often uses names Ephraim and Israel interchangeably. Judah is always Judah.’

The goal of the initiative was to educate people about this reality, and to reach out deep into the Christian Zionist community which strongly supports Israel which is unfortunately based on long-term false understanding of the Bible.

‘By reaching out to the people, we hope to make some change according to their application of how the approach these teachings,’ pointing out that truth was an important element of everything, since anything based on a lie will eventually fall apart.

Attendees of the conference said that the initiative was very essential to prove the right of the Palestinians in their land, and that the Israeli occupier is an outsider who came to Palestine under false pretext, which oppresses people and contradicts the messages of the Bible.