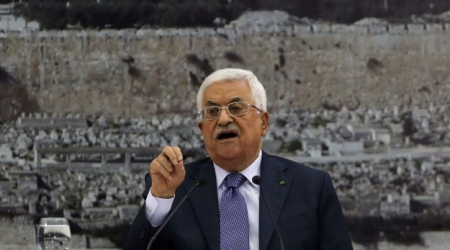 President Mahmoud Abbas warned Friday that the Palestinian Authority (PA) would take harsh steps if Israel continues to illegally withhold the tax revenues it collects on behalf of the PA.“If Israel continue to withhold our money, we will be obliged to take harsh steps,” stated President Abbas during a joint press conference with Luxembourg’s Foreign Minister Jean Asselborn, at the Foreign Ministry in Luxembourg.

According to WAFA correspondence, Abbas, this Friday, made a one-day official visit to Luxembourg, where he held talks with Grad Duke Henri, Prime Minister Xavier Bettel, Parliamentary Speaker Mars di Bartolomeo, in addition to a number of members of parliament.

“There is a serious issue; Israel is withholding our money, which entails putting the Palestinian state at an impasse. Therefore, we call on the world to exert the necessary pressure to compel Israel to release our money. Otherwise, we will be obliged to take some harsh steps,” added Abbas in the press conference.

Affirming that Israeli settlement construction was responsible for deadlocked negotiations, Abbas said: “The ongoing construction of settlements, which violates international laws, constitutes a critical issue between us and the Israelis.”

He affirmed that should Israel proceed with settlement construction, no negotiations would be held.

Affirming his commitment to peace making, Abbas stated: “We, the Palestinians, believe that the only way to achieve peace is through negotiations. When we approach any state with a request to recognize the State of Palestine or support us in the UN Security Council, it is not requested to antagonize Israel, but to support the Palestinians’ right to statehood.”

Abbas underscored the necessity for setting a clear terms of reference for the Middle East peace process and devising radical solutions within a previously defined timeframe to reach a final solution.

He affirmed his opposition to transforming the Middle East conflict into a religious conflict and commended the European Union’s decision to consider Israeli settlements illegal and to boycott their products.

According to the Luxemburger Wort, Asselborn condemned Israel’s withholding of Palestinian tax revenues.

“The destabilization of Palestinian authorities by way of budgetary restrictions cannot be in anyone’s interest, and especially no Israel’s,” Asselborn commented.

Asselborn reportedly called on Israel to stop its international violations and urged the UN Security Council to set out a roadmap for peace and two-state solution talks.