700 British artists sign on to cultural boycott of Israel 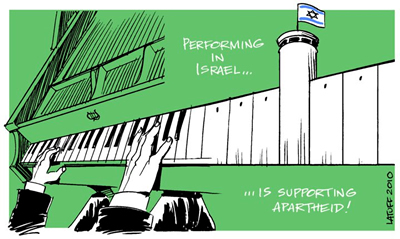 In the latest show of support for the international Boycott, Divestment and Sanctions movement, a group of 700 British artists, actors and musicians have signed on to a boycott of Israeli government institutions, to try to pressure Israel to end its discrimination against the indigenous Palestinian population.A letter published Saturday in the British Guardian newspaper by novelist Kamila Shamsie reads, in part, ‘It doesn’t take long in the West Bank and Jerusalem to work out that ‘apartheid’ is the only word that will do. It is present in the extensive infrastructure of military might, 3G phone coverage (not allowed to Palestinian mobile providers), and no-Arabs-permitted bus routes that cater to settlers in the West Bank whose presence there is illegal. It is present in the implementation of laws that make it virtually impossible for Palestinian residents of Jerusalem to acquire residence permits for their spouses from the West Bank and Gaza. It is present in the security checkpoint in the middle of a once-busy market street in Hebron where Israeli guards inspect your paperwork to make sure you aren’t Palestinian – absolutely everyone else is allowed through. It is present, most starkly, in the Separation Wall.’

Shamsie noted that Mike Leigh, Kate Tempest, Gillian Slovo, Brian Eno, Alexei Sayle are among those who have signed the pledge to accept neither invitation nor funding from any institution linked to the Israeli government until Israel complies with international law and principles of human rights.

The letter also referenced a statement by Israeli writer Ofer Neiman, who called on British and other international artists to join the boycott, saying, ‘The Palestinian people are being dispossessed, tortured and massacred by a brutal and powerful regime. Israeli dissidents are too few to change this reality by themselves, from within. Artists, in the UK and elsewhere, can play an important role in the collective effort to stop the Israeli regime’s crimes, simply by saying no to the use of culture for Israeli state propaganda. Those who do so may face smearing and bullying, but they will find supporters all over the world, including Israeli citizens who will stand with them.’

The choreographer Jonathan Burrows said in a statement, ‘The choice not to present work in Israel is not an attack on Israeli artists, but rather a recognition that the thing you do may not be appropriate in a situation of ongoing violent conflict, and that to ignore that is to support the idea that everything is under control and life and culture continue as normal, while bombs fall’.

The pledge itself is straightforward, reading as follows: ‘We support the Palestinian struggle for freedom, justice and equality. In response to the call from Palestinian artists and cultural workers for a cultural boycott of Israel, we pledge to accept neither professional invitations to Israel, nor funding, from any institutions linked to its government until it complies with international law and universal principles of human rights.’

Over 700 artists and cultural workers signed on as of February 14th, 2014, but the group ‘Artists for Palestine’ which organized the event said that the call remains open for more artists to sign on.

More information can be found at the group’s website, linked below: