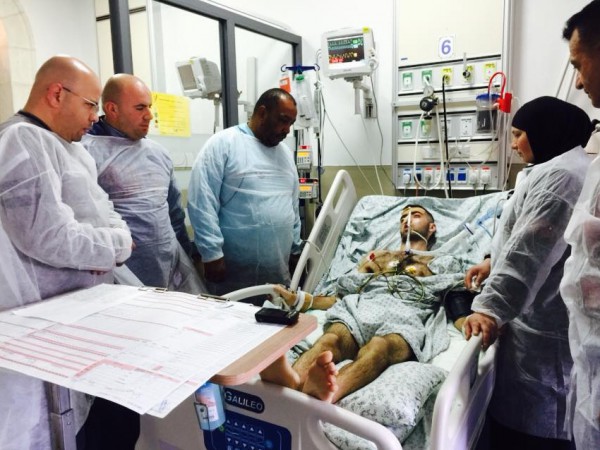 Residents of Beit Ummar town, north of the southern West Bank district of Hebron, welcomed on Saturday evening former political prisoner, Ja’far Awad, after his release from hospital. He was kidnapped by the army in November 1 2013, and developed various health complications. Hundreds of residents and officials, including the head of the Palestinian Detainees Committee, Issa Qaraqe’, and various social and political figures welcomed the detainee in an official ceremony.

On January 21 2015, the Israeli Prison Authority released Ja’far, 23 years of age, after deducting time served, and instated a suspended sentence of 18 months, in addition to 40.000 New Israeli Shekels fine.

After his release, Awad was instantly moved to the al-Ahli hospital in Hebron before being transferred to the Augusta Victoria Hospital in occupied Jerusalem due to his deteriorating health condition.

Dr. Abdul-Raouf al-Batta’, who was in charge of his treatment plan, said Awad’s health condition has improved, and authorized his release.

Spokesperson of the Popular Committee against the Wall and Settlements in Beit Ummar, Mohammad ‘Awad, said Ja’far was kidnapped by Israeli soldiers on November 1 2013.

In addition, Qaraqe’ said Israel’s policies that deny the ailing detainees the right to proper and specialized medical treatment are crimes committed in front of various international legal and human rights groups around the world, and demanded the International Community to act and oblige Israel to abide by international law.

The father added that, just before his son’s release on January 21, Ja’far was moved to the Ofer Israeli military court that ordered his release, before a Palestinian Red Crescent Ambulance moved him to the al-Ahli hospital.

After suffering some compilations, Ja’far was moved to the Augusta Victoria hospital, in Jerusalem.

Ja’far’s father said his son was a completely healthy young man before he was imprisoned by Israel, and developed various health issues, especially after receiving an injection in the Eshil prison clinic, in Beersheba (Be’er as-Sabe’).

After the injection, Ja’far also developed complications in his left eye, his thyroid gland, and various respiratory issues; the Israeli Authorities only moved him to Assaf HaRofeh Medical Center after he fell into a coma.