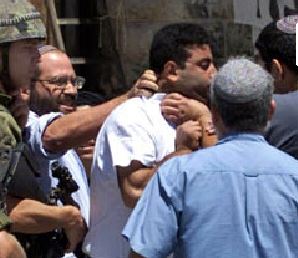 A number of Israeli extremists attacked, on Saturday at night, a Palestinian cab driver in an area in Jerusalem, causing several cuts and bruises that required hospitalization. Soldiers kidnap a Palestinian near Jerusalem, surround ‘Anata town.Eyewitnesses said the driver was near in the western part of Jerusalem, when a number of extremists started shouting at him before physically assaulting him.

The WAFA News Agency said the wounded Palestinian man has been identified as Ibrahim Bader.

In addition, undercover soldiers of the Israeli army kidnapped a young Palestinian man, driving near the Maale Adumim junction, near the al-‘Ezariyya town, southeast of occupied Jerusalem.

The soldiers violently assaulted the man, before kidnapping him, and confiscated his car.

In addition, Israeli soldiers surrounded, on Sunday at dawn, the eastern part of ‘Anata town, northeast of occupied East Jerusalem, and installed a roadblock.

Media sources said the soldiers stopped and searched dozens of Palestinian cars, and investigated the ID cards of the residents while interrogating them.

Hundreds of Palestinians, including schoolchildren, workers and employees, were trying to cross but the soldiers delayed them for several hours.