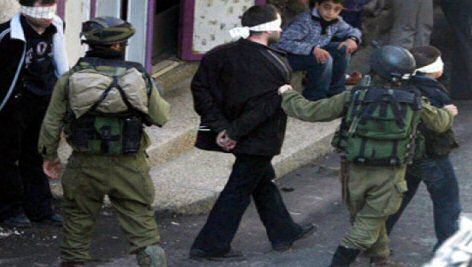 At least seven Palestinians were abducted by Israeli military and police, on Monday, in occupied East Jerusalem and the West Bank, according to reports by local and security sources.In Jerusalem, Israeli police arrested four Palestinians from the neighborhoods of Sheikh Jarrah and Mount of Olives (Al Tur), according to the Wadi Hilweh Information Center. The four were identified as Ahmad Abu Fuli, 16, Majdi Hadra, Mohammad Abu-Sbetan, 16, and Lo’ai Sayyad.

The four detainees were led to a local interrogation center in the city.

Meanwhile, WAFA further reports that the Israeli army stormed the West Bank city of Jenin and arrested two local residents, who were identified as Bashar Sablan, 24, and Tareq Mansour, 19.

The army also broke into the village of Za’tara, east of Bethlehem, where they abducted Harith Abu-Amriya, age 27, after raiding and searching his house.

Late Sunday night, Israeli army forces stormed many villages and set checkpoints across the Hebron district in the southern West Bank, though no arrests were reported.

Israeli border police, on Monday, also raided a youth camp that was set up east of Jerusalem to protest Israeli settlement expansion plans in the area, according to local sources.

The symbolic village known as “Jerusalem Gate” has now been attacked and ravaged six times by Israeli forces. A number of people were injured in the raid.

In January of 2013, Palestinian activists and foreign supporters set up a similar camp which they named “Bab al-Shams,” or “Gate of the Sun.” Despite its peaceful trend, the camp was nonetheless rammed and evacuated by the Israeli army and border police.

A similar camp was also erected in February of 2014, when 300 Palestinians and international activists gathered to set up a makeshift camp in an abandoned village in the Jordan Valley. The village, Ein Hijleh, had been abandoned after Israel captured the West Bank from Jordan in 1967.

Settlers, divided in small groups and protected by Israeli police, stormed the mosque’s compound and carried out provocative tours, infuriating worshipers who responded by chanting religious slogans to fend the incursion.

However, police managed to contain the incident, preventing clashes, which have been trending upward following the latest Israeli onslaught on the Gaza Strip, during July of 2014.

Israeli police impose restrictions on Palestinian worshippers’ entry, particularly on women and youth. Police retain their identity cards prior to entry, in anticipation of any clashes and to possibly detain any who might be involved.

The city of Jerusalem has been a scene of ongoing violent and deadly incidents which skyrocketed following Israeli settlers’ murder of 17-year-old Muhammad Abu Khdeir, who was found burned to death in a wood in Jerusalem, last July.

Since then, violent incidents have caused loss of life for both Palestinian and Israeli sides.