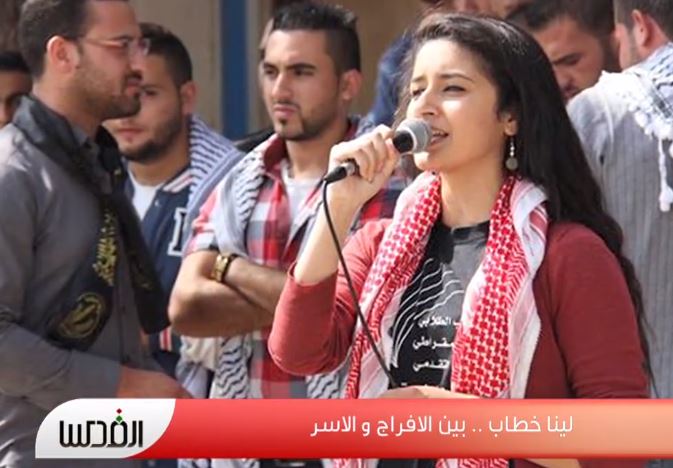 The Israeli military court in the ‘Ofer prison, in the occupied West Bank, sentenced on Monday, a Palestinian journalism student who is also a Folk Dancer and activist, Lina Khattab, to six months imprisonment and a 6000 Shekel fine.The court also instated a three-year suspended sentence of Khattab, 17 years of age, for what it called “participating in a protest in solidarity with Palestinian political prisoners,” in front of the Ofer prison.

Lina Khattab, who is a Journalism student at Birzeit University, was kidnapped by Israeli soldiers on December 13, 2014, during a nonviolent protest organized by students marking the 47th anniversary of the establishment of the leftist Popular Front for the Liberation of Palestine (PFLP).

This past December, an Al-Quds News Agency broadcast report about Lina featured an interview with her mother who spoke of the kidnapping of her daughter by the soldiers, who deliberately targeted her for her nonviolent political activities.

In the interview, Lina’s mother said that when she managed to see her for the first time, she noticed that her daughter has lost a lot of weight, and also told reporters that despite harsh living conditions and interrogation methods, her daughter remained steadfast to her principles of justice and liberation.

She added that her daughter told her about the extreme beating she was subjected to when the soldiers kidnapped her, before placing her in their jeep, and that the soldiers were angered that despite the beating, she was not crying, and even asked her why she wasn’t crying, but she remained strong and steadfast without showing any signs of weakness.

The soldiers claimed she hurled stones at them, but she continuously told them she was visiting her friend, and that the soldiers were just trying to frame her by making different allegations and fabrication.

Whenever she was moved to HaSharon to the Ofer military court, the soldiers would wake her up nearly at 2 am, and deprive her from sleeping, before moving her to Ofer in a military vehicle while deliberately running cold air through the area of the vehicles were she was held, and once arriving in Ofer, she would also be placed in a cold room with a cooling system on despite the cold weather.

Despite being moved to Ofer before dawn, her court hearings would, on each occasion, be held around 4 in the afternoon.

Court judges continuously refused to allow her to be released on bail, and held eight separate court hearings in an attempt to bring soldiers who would testify against her.